The rise and rise of the selfie

Mxit came first, Facebook followed, Twitter was not far behind  but while each of these social media platforms was growing, the “selfie” was quietly establishing as one of the hottest trends in recent times.

If you’ve been buried under a rock somewhere, a selfie  is a picture or photograph taken by one’s self and shared on social media platforms. There are different kinds of selfies taken daily, by celebrities and ordinary people alike.

There is even a song about selfies by the band the Chainsmokers. But while their popularity is undisputed, the motivation for this trend is not quite clear.

Academics, psychologists and sociologists alike are still probing the obsession with the self-image and the need to share almost every moment via  a turned-around camera. Studies so far have have shown that selfies are an indication of a person’s obsession with appearance and the need for attention which is largely attributed to a low self- esteem or narcissism even.

People compete for the perfect selfie in all sorts of settings, including the gym, at a party out with friends,  just lazing around or studying in their rooms. For others it is about a new hairstyle, a hot outfit or their make-up.

“I usually take selfies when I have a new hairstyle, I take a lot of selfies then,” says 4th year Social Work student, Sinethemba Nkosi.

For Nomvelo Chalumbira, 2nd year BA student, she takes selfies when she is out with friends in a new place or on holiday, and sometimes when she is really bored when studying. 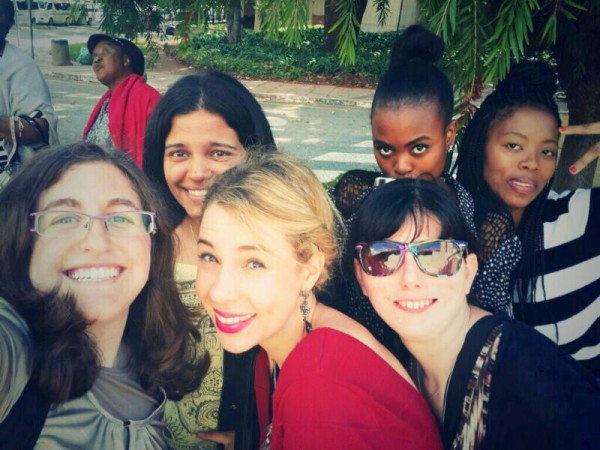 SAY CHEESE: A group selfie with some of #teamvuvu.      Photo By: Illanit Chernick

Selfies are not a big deal for Silindokuhle Mavuso who is studying a BSc Honours in Geology and Palaeontology, “I barely take selfies, maybe one or two a month and if I take one it’s because I’m drunk with friends.”

Selfies are intimate and relate one’s personal experiences. But because of the belief that “if it’s not on social media, it did not happen,” content like selfies is readily shared on social media.

Nkosi says, “Most of the time I use them as DP [profile picture] for BBM or Whatsapp and Facebook.”

Mavuso who thinks taking selfies is conceited and pointless, tries to avoid taking them. He believes, as Chalumbira does that, taking a selfie is a very vain thing to do.

Whatever your feelings about them though, the popularity of the selfie is such that the word has been added to the Merriam-Webster English dictionary.

It was announced this week that the word, defined as “an image of oneself taken by oneself using a digital camera especially for posting on social networks,” will now join other terms like ‘tweep’ and ‘hashtag’ in the  dictionary.