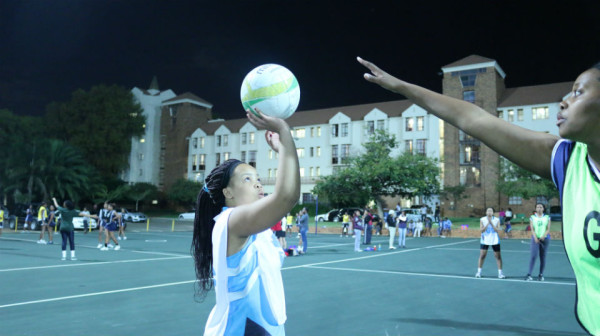 Going up the ranks: Goal Scorer Miya Mathaphela (left) from Medhurst during a game against Jubilee which saw them earning a 25-9 victory. Photo: Nqobile Dludla

The top three Wits Netball Internal League (WNIL) teams are not planning on backing down until they get the coveted title once the season resumes next week Tuesday.

This semester will see all teams continuing to prove why they are the best at what they do.

This of course won’t come without a fight, as the other teams attempt to dethrone the Medics who are the current defending champions since 2011.

“We’re only coming back stronger than we were before,” said Medics captain, Florencia Mnisi.

“We strive to be the best. In doing so, we’ve got to keep improving our skills and being better than we were before.”

Medics are leading with 12 points followed by the new residence team, Noswal Hall, and Medhurst, both also with 12 points on the log. What puts Medics in the lead is their goal difference (GD) score sitting at 129 compared to Noswal Hall at 66 and 64 for Medhurst.

These top three of the 12 performing teams won all four of their matches last semester.

Medics’ history as defending champs, after dethroning the once most-feared team Jubilee, is posing a threat to other teams yearning to attain the title. Last year Medhurst walked away with bronze medals in third place while Jubilee lost to Medics and came second.

“We’re like a target everyone wants to get to, so we get pressure because we need to hold on to our title. We are all after victory,” said Mnisi

True to Mnisi’s assessment, new kids on the block Noswal Hall “want it all”.

“A juggle of the positions would be more interesting, I mean why introduce something new if we want to keep things constant? I believe competition is healthy, keeps everyone on their toes. I would like to think it’s motivating,” said Keneilwe Manda, acting captain of the Noswal team.

Noswal have been playing without a captain since the season began in April. This, however, has not held back the new kids from outperforming Junction by 14-9, Braam Centre by 45-7, Reith by 23-13 and Esselen by 21-8.
“Team work and cooperation is what has kept us together without a captain,” said Manda.

While fitness is a key area for improvement from last semester, Manda also emphasised “making a bigger name for the new kids on the block”.

“We are a team that wants to show that [people should] never underestimate a developing team,” said Manda.

Compared to the other two top teams, Noswal has new players who have not experienced the league before.

Speaking on the performance of the top three teams, WINL coordinator, Ofentse Moropa, said: “If you had asked me before the season started, I would have said that they [Medics] would win without a doubt. However, it is Noswal’s first time in the league and they look like they’ll be the dark horse of the competition and might cause major upsets.”

Indeed, at number three, Medhurst realises that to move up on the score board will take a lot of commitment and effort from the whole team.
Medhurst faced last year’s second-place winners Jubilee last semester in a disappointing match that left Jubilee wondering what had hit them with the score 25-9 in Medhurst’s favour.

“We plan on going up the ranks and the only way to do that is to stay focused and practising and giving each game our best. We are hoping to be number one. We would love to take the trophy home this year,” said Medhurst captain, Apel Kunene.