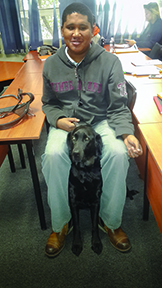 Being born blind was not a challenge to this music producer, who has defied all obstacles to follow the lyric in his heart.

Jermaine George’s (23) love for music developed when he was five, the first day he laid his hands on a Casio piano. While the gift of a piano had initially been for his brother, he took to it with a passion that allowed him to realize his dream. George described music as “a way of life” and said music was the best instrument anyone could use to get to know who he is.

He followed his love after finishing school and is currently studying a Bachelor of Music at Wits.

Wits Vuvuzela asked George about how he performs the technical functions of music production as a blind person. He said he has always been exposed to recording but got his first equipment in matric.

“Everything is so digital right now that computers are more advanced and more powerful. There are screen readers that talk to me and tell me what’s on the screen and what to press,” said George.

He believes there are many ways to get around things and “being blind alone teaches you patience, music just teaches you discipline.” George added: “If you do not have the love for music production than you should stay away from it. Even for people who can see, they look at it and don’t know what’s happening,“ he said.

At the age of 22, George lost his parents and described that as the lowest point in his life. He said his mother had raised him to be independent, so losing the comfort of her presence was naturally painful but it did not abandon him in a helpless place. “I was never worried if I could cope… the world will never stop spinning because one person died,” he said.

When asked about the main challenges in his life, George said it was people and their understanding of what it means to be visually impaired. “Sighted people are totally shallow, so they tend to judge a book by its cover” he said.

George said impatience is his biggest weakness because he hates rhetorical questions and tends to be sarcastic. He has had to teach himself how to navigate the Wits campus as a function of memory. “It has been a real mission training myself to get to know this place.”

On his relationship, George said his girlfriend “is wonderful”. “The dynamics, we are just two people going through life only difference is she can see and I can’t” he said.