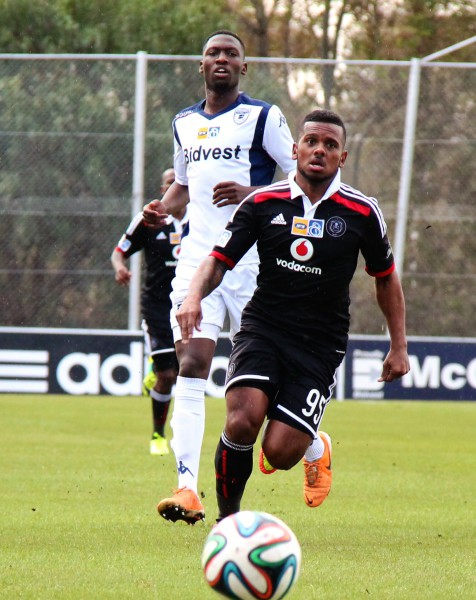 CHASING DOWN: Buhle Mkhwanazi of Bidvest Wits watches Kermit Erasmus run past him during their MTN8 semi-final clash. The Clever boys are chasing Pirates after the Buccaneers took a two goal lead in the two match tie. Photo: Luca Kotton

Orlando Pirates outsmarted the Clever Boys in a 2-0 victory at a packed Bidvest Stadium earlier this afternoon.

The win leaves Pirates in a commanding position over Bidvest Wits in the two-leg MTN8 semi-final.

The Buccaneers tactically looked stronger than the home team with ample goal-scoring opportunities and a very tight defence.

The match started in typical fashion for both top-placed Premier League sides with Pirates dominating possession but unable to create any telling opportunities.

The first half ended scoreless but early in the second half, a Daine Klate corner-kick was met by the head of Orlando Pirates captain Siyabonga Sangweni for the first goal of the match.

After the goal, Bidvest Wits pushed for the equaliser, however, after missing a golden chance to score in the Pirates box, the away side countered with more pace and pressure.

Thabo Matlaba netted the second for the Buccaneers, with a composed finish past the helpless Thapelo “Jackson” Mabokgwane who was left one-on-one with the Pirates defender.

The game ended with Bidvest Wits unable to break down the defence of Vermezovic’s men who held the score at 2-0.

Bidvest Wits will travel to Orlando Stadium next week Saturday with a mountain of a two-goal deficit to to climb.

Vermezovich added,” We realise that 2-0 is a very dangerous result and Wits is also a very strong team and we won’t underestimate them, after today’s result.”