The silent scream of the tokoloshe 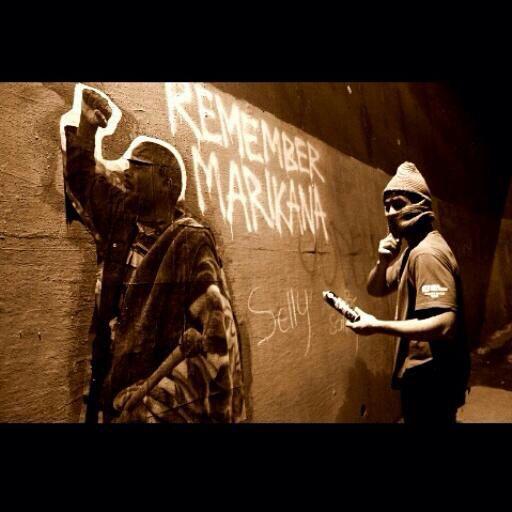 THE BOGEY-MAN:The Tokolosh, a group of anonymous graffiti artists, use the cover of darkness to create graffiti and stencils with political messages. Photo: Tokolos Stencils Collective

A group of “tokoloshes” has banded together to ensure South Africa does not forget about Marikana and ongoing social injustices.

Tokolos Stencils, a group of anonymous graffiti artists, has resuscitated the “spirit of the tokoloshe” in order to fight for the underdog. They believe what they do is not vandalism but rather “sharing space”.

“We believe in sharing. Sharing ideas, sharing art, sharing news – and most of all, sharing space. It is only those who want to define certain spaces as for the rich and other spaces as for the poor, who are upset by our work,” they said in an e-mail response.

The group chose its name because it believes that in recent folklore the tokoloshe has been given a bad name. They liken this to any oppressed groups in society, “like poor black men and lesbians”. “As such, the tokolos can be seen as a representative of the unjustly damned.

The damned of the earth, forever misrepresented by the elite and the elite-controlled media. But was not Robin Hood a similarly misunderstood figure? The tokolos steals private space and makes it public – in other words, it returns space to its rightful owners,” they said.

Tokolos Stencils has been very loud in its silent protest. Supporters have desecrated the Cecil John Rhodes statue on UCT main campus and peppered Cape Town with graffiti and stencilled slogans and images. Their work can be seen anywhere from the Ferrari dealership windows to billboards to the side of the wall. Their trademark stencil is the “man in the green blanket”, Marikana workers’ leader Mgcineni Noki, who was killed by police along with 33 other protesting miners in August 2012.

Their other stencils include “This City Works for a Few”, a response against the Western Cape’s tagline “The City that Works for You” and “Remember Marikana”. When asked why they chose to band behind the mysterious African “bogey-man”, the tokoloshe, they said their name is supposed to challenge stereotypical thinking in our society by “people who have imprisoned their minds and shut away their creativity of thought”. This group of artists stays true to the image of the tokoloshe as elusive in their mysterious silence.

They work in the dark, using scare tactics and creating thought-provoking images. They also encourage South Africans to be part of the “revolution” by allowing people to download and submit their own political stencils, with hints about where to put them and how to do it.

The artists also warn the “messengers” to be wary of “the 5-0” [the police]. Pierrinne Leukes, spokesperson for the city of Cape Town, said the issue with the vandalism is a safety and security issue. She said the city spends up to 67% of its budget on the poor and residents of Cape Town have the highest access to services in the country.

She said resources have been diverted from communities to clean up the “graffiti vandalism”, money which could have been used to improve service delivery.