BOXING: Witsies box their way to the top at local tournament 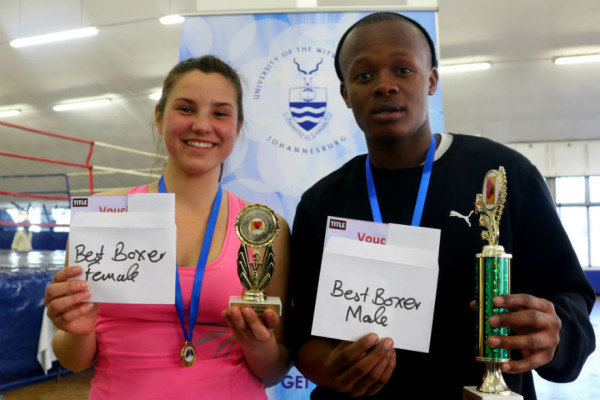 Although Mamba walked away with the coveted titles, he was not overwhelmed by his performance.

“I feel like I could have done better because I wasn’t throwing as many punches as I would have loved to,” said Mamba.

Krüger though was a little more positive. “I’m satisfied with my performance, but improvement is always needed. My opponent fought well and I think we both can learn out of our performances”, said Krüger

Although “surprised” to be given the titles, Mamba’s boxing prowess spoke for itself when he faced Zusiphe Sicwebe from his own club even before he laid his hands on the trophy.

Sicwebe, also known as “Zues”, moved away from Mamba, as soon as the fight began. Sicwebe, who often waited for Mamba to strike first, couldn’t find a rhythm for his jabs and counters.

Mamba drove the action in the first round, but had difficulty in closing the gap to land anything clean. Still, the tough favourite plugged away, hoping to break the barrier that was Sicwebe’s movement and defence.

All it took was one shot from Mamba to change things and that’s exactly what happened early in the second round. In this round both boxers were more energetic and more aggressive.

Mamba tried to trap Sicwebu against the ropes but Sicwebu quickly moved away from Mamba’s follow up left hook to the face. Sicwebu no longer played the defence game, making it more challenging for Mamba to follow through with combination punches.

It didn’t take long for Mamba to regain his rhythm in the third round which saw the pace of the fight losing momentum as both boxers played it clean, but not following through with strong target jabs. Mamba won eventually while Sicwebu walked away with Best Bout award.

Krüger’s fight was more aggressive and energetic. Her opponent was Tshepiso Lehutjo who suffered head blows from Krüger’s combination jabs to the head.

Lehutjo tried to be unpredictable by changing her jabs to score points to the stomach, but this made it easier for Krüger who easily threw a left hook that exploded the second it connected with Lehutjo’s jaw.

“I’m very impressed with our boxers, especially since a lot of boxers went into the ring for the first time. It’s very important because the first time is really not about winning or losing but getting rid of that fear of getting into the ring which is scary”, said Wits Boxing coach Njabulo Mahlalela.