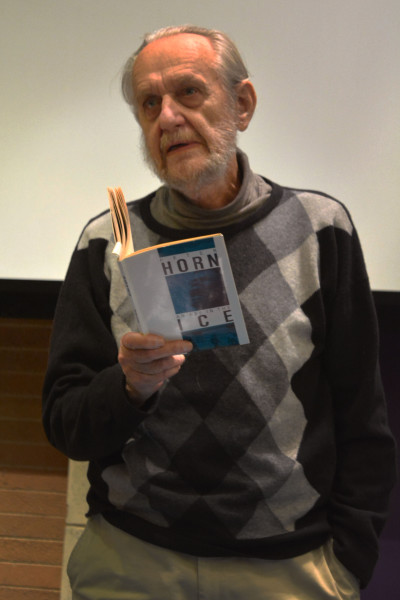 The opening of the first ever student run literary festival kicked off at Wits today with a panel on the social life of poetry.

The Fine Lines literary festival was envisioned and organised by the student council members of the School of Literature, Language and Media (SLLM).

Students Priyankha Thakur, Saul Musker and Nelisa Ngcobo put the festival together to “create conversation” between students and experts.

Thakur told Wits Vuvuzela that they realised there was “a deficit in opportunity for events in our school”. They wanted “to create a place where students and upcoming authors could interact with experts” which they would not usually have the chance to connect with.

“It started off as this absurd idea while we were sitting on the floor outside an office in Senate House. We still can’t believe it came together.”

Musker said, “The festival is an open space in an intimate setting for interaction to take place.”

“We were a bit nervous initially but the staff within the SLLM were so helpful and willing to give us contacts. The poets and authors were so open to the idea of a student festival, it was really positive.”

Mann said, “The fact that this festival is coming from students is good news.”

Following the poetry readings a discussion about the life of poetry in the world was presented.

“There are poems for different times and moments. There is one poetry but hundreds of different types,” said Horn.

Kgositsile told the audience that “one has to get inside a poem to see how it connects with the outside world”.

The festival will be running until Friday, September 5th. Students can expect to see authors and poets like Antony Altbeker, Ivan Vladislavic, Mandla Langa, Shireen Hassim and the Botsotso Poetry group.