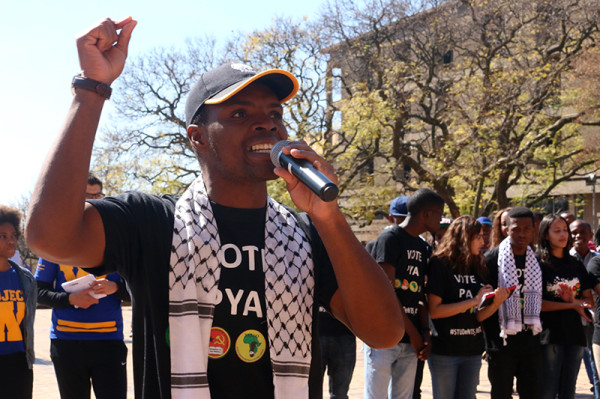 TRIED & TESTED: Progressive Youth Alliance (PYA) candidate Mcebo Dlamini tries to convince students to vote for the “very same leadership that has been with you through thick and thin”. Dlamini was addressing a crowd of students at one of the lunch circuses held outside the Wits Great Hall.  Photo: Nqobile Dludla

The Progressive Youth Alliance (PYA) continues to maintain it will dominate the 2014/2015 Student Representatives Council (SRC) owing to its track record ahead of the elections this week.

The PYA believes Witsies will send the votes their way as the “tried and tested party,” despite criticisms from their opponents that they (PYA) are far too reliant on their historical achievements.

Speaking to Wits Vuvuzela, PYA candidate Amogelang Manganyi said: “As a tried and tested party, we are still relevant”. “When I speak about us being tried and tested, it speaks to the notion of candidate for candidate, experience for experience, organisation for organisation, we’ve been here the longest, and we know how things work”, said Manganyi.

Among other critics of the PYA, Valentine Ndlovu, 2nd year BA who wasn’t moved by the history lesson given by the PYA at Monday night’s circus at the Highfield Dining Hall pointed out how much the PYA “usually talk about what [they’ve] done” and challenged the organisation on what it’s planning to do for students.

“Rehashing history isn’t really viable. We need to keep up with the times. We can’t always go back to the stuff that you’ve done”, said Patience Raidani, 1st year BA.

Thabiso Funde 1st year BA felt that as a first year she doesn’t know the PYA’s track record and therefore is interested in what they are offering.

“As first years we don’t know exactly what you [PYA] did and we can’t go off by assumptions that you [PYA] guys did this and that’s going to carry on. We need to know what you [PYA] are offering”, said Funde.

Who will occupy the seats?

Despite being challenged by critics and the arrival of the Wits EFF, the PYA is “confident” that the SRC will remain a PYA-led SRC ahead of the elections.

“I think generally students trust the Progressive Youth Alliance however when it comes to elections, you can never be certain because last year we were certain that we were going to get all 15 seats and we didn’t,” said Ntshanana.

Ntshanana also added that he doesn’t “think the [Wits] EFF have penetrated the space, they have been on campus for less than 6 months and I think what students want to know is what you have done for them which is a question that the [Wits] EFF cannot answer because they haven’t done anything”.

Wits EFF member, Tshepo Goba thinks otherwise. Goba claims that they “have raised the bar and brought in a new brand of politics” to Wits.

“As the [Wits] EFF we have raised the bar, we brought in a new brand of politics, we stuck to our guns even when we are being labelled as backward and racist and anti-progressive. It’s really up to the students”, said Goba.

Project W who are also confident about retaining SRC seats based on their “hard work” and “growth”, said: “We will definitely get seats and we will make a difference when we go to the SRC and we have the students that we serve to thank above everything”, said Project W candidate Thamsanqa Pooe.