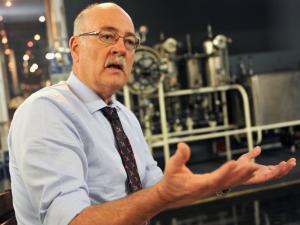 Professor Guy Richards graduated from the University of the Witwatersrand in 1978 with a MBChB degree. He went on to become a Fellow of the College of Physicians of South Africa in 1985 and acquired a PhD in medicine in 1992. He is the director of the intensive care unit at the Charlotte Maxeke Hospital. Professor Richards is also a professor in the department of medicine at Wits and a principal physician in the pulmonology department.

How and why did Ebola resurface?

Ebola is a virus that seldom affects man. However, as we invade areas that were previously wilderness, we will interact with viruses that are usually limitedexclusively to these zones. The reservoir host is the fruit bat, which itself is unaffected by the virus. It can however infect primates or possibly other animals and can then be transmitted to humans if they eat or slaughter these animals – so called “bush meat”. It is frequently associated with diarrhea and bleeding from the gut or nose etc. People who come into contact with these secretions could become infected, especially if they have cuts or beaks in the skin or they get the secretions on their mucous membranes or eyes. Women are most often affected as it is their duty, traditionally, to wash and prepare a body for burial and, as such, are most frequently exposed. The other problem is that health care workers (HCW) dressed in protective clothing look frightening and seldom can speak the local language. They then attempt to remove the bodies in order to dispose of them safely, which is in direct contradiction to cultural beliefs that dictate thata person should be buried in andaround the village where they lived.

Regarding the widespread panic: is the public overreacting or not?

There are no cases in South Africa at present. If there were, they would be isolated and spread of infection limited. Only people who have been recently in Liberia, Sierra Leone, and Guinea or, to a lesser extent Nigeria, HCW in Lagos hospitals or HCW who have dealt with such patients, are at risk. It will not “waft” across our borders and the prime mode of spread would be by air as those who are ill would not survive a road or rail trip from West Africa.

What precautions are taken to screen individuals at our South African borders?

Those people coming from West Africa are given a questionnaire regarding their contact with ill patients and all patients are screened with the “fever screen” device. This would only pick up patients who are already ill, whereas those incubating the disease would present later with fever.