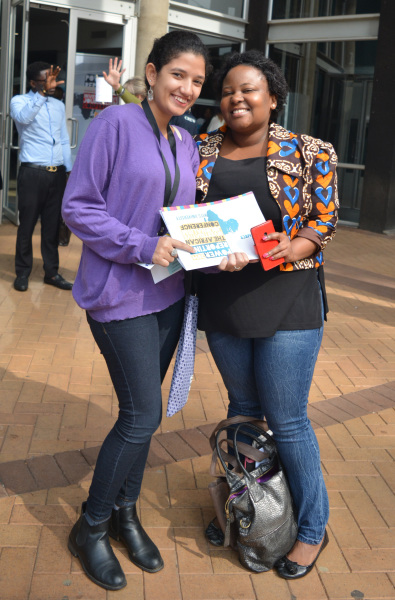 POWERFUL: Farah Wael (left) and Tebatso Kgagke (right) before the first session of the tenth Power Reporting conference. They travelled together and plan to sit in on the data journalism sessions together. Photo: Zelmarie Goosen.

The tenth installation of the continent’s largest investigative journalism conference opened its doors yesterday to delegates from more than 16 countries. Hosted by Wits Journalism at Wits University, the 2014 Power Reporting conference kicked off with a focus on data journalism.

Internationally acclaimed author and academic Jock McCulloch opened the conference with a keynote address about his research into corporate crime in the South African mining industry.

McCulloch’s book South Africa’s Gold Mines and the Politics of Silicosis took nearly 54 months of data collection and analysis. Through his work, McColloch was able to show how the mining industry, together with the apartheid state, hid the extent of the occupational lung disease among its workers for nearly a hundred years.

Online journalist Lenyaro Sello, from local broadcaster enca.com, said she believes data journalism is the “future of the craft”.

Marvin Adams from The Citizen said he would like to learn how to truly understand data journalism because he thinks it’s useful in “becoming a better investigator”.

Many of the delegates said they are looking forward to the new skills offered at the conference but also to learning from one another.

“I want to attend as much as possible and learn from journalists with decades of experience,” said Anele Mjekula from South Africa’s oldest independent newspaper, Grocott’s Mail in the Eastern Cape.

Yaw Gyau, a journalism lecture, said he was very interested the tools used for data journalism and hoped to take these back to his students at the Ghana Institute of Journalism.

As part of the programme, the annual Carlos Cardoso memorial lecture on freedom of expression will take place tonight. This year the will be given by Rafael Marques de Morais of Maka Angola.

The conference runs from November 3-5 at Wits west campus.