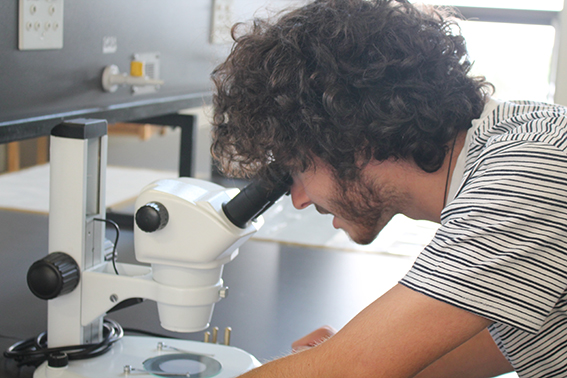 FIRST-YEAR BSc Astronomy and Astrophysics student Saul Hurwitz was born and bred in Johannesburg and wants to go to space one day. His plans for the year include passing and getting into his degree’s “restricted courses”.
Hurwitz also plays the piano and says his favourite constellation is Taurus, because that is his star sign.

Why did you choose this degree?
I definitely didn’t want to go into business and even though I considered a BA, I needed to think about the future and a career, so I chose this. By the end of this degree, I’ll either be able to go up into space or send stuff into space. So that’s pretty cool.

What’s the coolest thing you’ve learnt so far?
In physics, we learnt how to prove one of Einstein’s equations using dimensional analysis. It proves that the faster you go, the slower you age. But at our speed it kinda means nothing.

Is everything that happens in Interstellar accurate?
No [laughs]. It was very cool though! But, I wouldn’t try it at home, don’t fly into a black hole. Those guys were trained professionals, so they knew what they were doing.

What’s the best part of being at Wits?
The chips at Sizzlers. They’re incredible.

What’s your favourite science or science-fiction movie?
Interstellar, then Cloud Atlas, but I also like Predator. My all-time favourite would have to be Star Wars: Episode III though, because that’s when it all goes down.

What would you wear under your space-suit?
Can you even wear anything under a space-suit? I’d wear socks, because it probably would be really uncomfortable to not wear them. So, yeah, socks and underwear.

What’s the best piece of advice you’ve ever been given?
Advice is a form of nostalgia, unpacked from the dumpster of the brain, wiped off and sold for more than it’s worth. Basically, advice is crap.