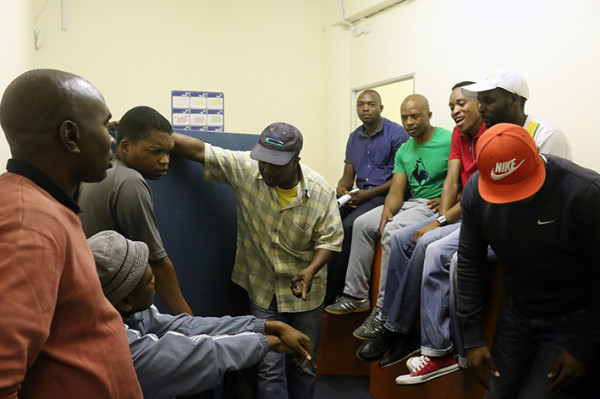 SITTING-IN: (Right to left) Olando Ndzayo, Evans Shonhe, Shadrack Baloyi, Samuel Mosia, Hendrik Kqarajoana, Alfredo Zuma, Linneth Masange and Richard Ndebele are amongst the workers employed by MJL Electrical that staged a sit-in at the offices yesterday afternoon because they had not been paid in four weeks. Photo: Dana Da Silva.

Employees of MJL Electrical stage a sit-in to draw out their employer to answer questions after they go unpaid yet again.

Outsourced electrical workers at Wits University staged a sit-in yesterday afternoon to force their employer to account for their lack of pay over a 2-week period.

The workers employed by MJL electrical refused to leave their offices in the Central Block building. “We workers are occupying the office, we are seeking attention from our boss to come answer the questions and tell us exactly what is happening”, said Samuel Mosia, one of the workers.

“We just need our boss’s attention. We’ve been emailing him, calling him but he’s never pitched”, he said.

According to Mosia, the owner of MJL electrical, George Cresswold, told the workers he was having problems with Wits and that he was sorting out paper work with the Wits Property and Infrastructure Management Division (PIMD) and once that was done he would pay his employees. “What I can say is that he’s dodging to pay us, we don’t really know a good reason for doing that,” said Richard Ndebele another worker from MJL electrical.

When contacted by Wits Vuvuzela, Cresswold said that he was unable to comment.

The workers say they spoke directly with Mandla Mdluli at PIMD, and according to him, the University does not owe MJL electrical anything. The workers asked PIMD to intervene by asking for their salaries to be paid and to get another contractor to replace Cresswold’s company.

This is not the first time that MJL workers have had payment issues. Earlier this year, the workers staged a similar sit-in after they went unpaid for 6 weeks.