OPINION: A look at #RhodesMustFall from the outside

Stepping onto the grounds of the University of Cape Town, Wits Vuvuzela journalist Valerie Robinson speaks to two PhD students for their view on the removal of the Cecil John Rhodes statue. 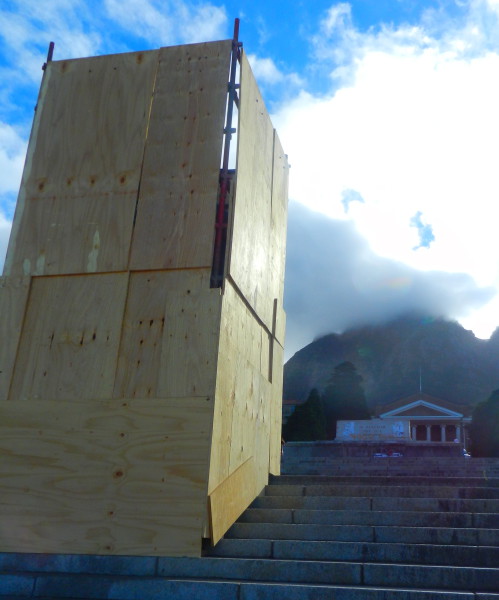 BOXED IN: The Cecil John Rhodes Statue at the University of Cape Town has been boxed pending a final decision about it removal. Photo: Valerie Robinson.

I stepped onto the University of Cape Town’s (UCT) campus as an outsider for the first time in the middle of the Rhodes statue debate, this past week, to find a massive box where the statue used to sit.

The words “Fuck Rhodes”, spray-painted over the crisp clean letters of the memorial plaque that has probably greeted its last generation of graduates.

The debate about transformation on campuses came into the spotlight this past month following the protests over the Rhodes statue on UCT’s campus.

What started when students threw human waste at the Rhodes statue on March, 9 has now spread throughout the country. The future of the Paul Kruger statue in Tshwane’s Church Square has now also come into question.

James Mwase, a PhD student at UCT said that he does not believe that the removal of the statue will make a difference.

He believes that the issue of transformation goes much deeper and that it is something that should have been started with our first democratic elected president, Nelson Mandela.

Another PhD student who comes from Zambia, and did not want to be named, said she does not believe the statue signifies anything but what really matters is if someone is able to live free of oppression today. “I feel like it has happened and its past and people have to move on.”“I mean it doesn’t really wipe out the history of Rhodes so whatever injustices people think he did, I don’t think it changes all that,” said Mwase.

“He owned our country too so us Zambians can also say some things in South Africa were built from our mineral resources so what should we do for us to get it? And I don’t think it really matters now we just have to move on,” she added.

The council in charge final decision on the statue’s possible removal is set to meet on April 8.