A year after they were kidnapped, the 276 female students taken by Boko Haram are still missing despite a flurry of social media campaigns built on the hashtag #BringBackOurGirls.

This week marks a year after the 276 female students were abducted from a secondary school in the town of Chibok in Nigeria.

According to Ayabonga Cawe, the co-founder of Rethink Africa, the reasons that the girls are not back yet reflects on the Nigerian state’s failure and inability to carry out its responsibility.

“It shows that what should be the responsibility of state, which has to be the protection of most vulnerable, has not been met,” said Cawe.

“It’s clear state failure to not even have an intelligence capability to track where the girls are or where Boko Haram is,” he said. “To not be able to neutralise and quickly stamp out a threat that has the potential to stop the country”. 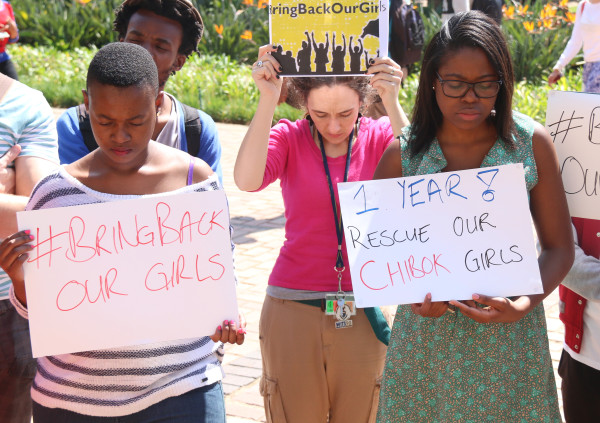 STILL IN OUR THOUGHTS: Media studies marches have a moment of silence, remembering the Nigerian girls who were abducted by Boko Haram a year ago.

Singer Yvonne Chaka Chaka told Wits Vuvuzela that she doesn’t think South Africa and the rest of the continent has done a lot to help the kidnapped girls.

“It’s not like we don’t know who took the girls,” she said.

“We should take buses and go to Nigeria and scream until those girls get out.”

Cawe and Chaka Chaka were speaking on the sidelines of the Doing Human conference held at Wits this week.

Panashe Chigumadzi, a Wits Masters student, said: “If I’m really honest and most of South Africans are honest, we have done nothing”.

For Chigumadzi, women everywhere are not safe “with or without terrorism”.

On Tuesday, the Wits School of Literature, Language and Media studies organised a solidarity march for the Chibok girls.

According to the head of the Media Studies department, Mehita Iqani, the kidnapping became a media issue the moment the hashtag #bringbackourgirls made its way around the world.

“It has always been a media issue,” she said. “This was spread through media forms, and made global by media,” said Iqani.

The organiser of the march, Dr Ufuoma Akpojivi, said: “As a Nigerian who’s also researching on ‘the bring back our girls’ movement, I felt that it would be good for us to create an awareness and remind society that the girls are still missing.”

But Cawe believes that social media campaigns have a lot of unintended consequences including negative ones.

“It doesn’t necessary help the young girls, it creates a high value target of young girls,” he said. “It creates bargaining chips that people can use on the political power play.”

“It’s a huge problem on how the media frames,” Cawe said. “The media frames it in a way where it’s asking an institution from the West to come and rescue the girls but also rescue Africa.”