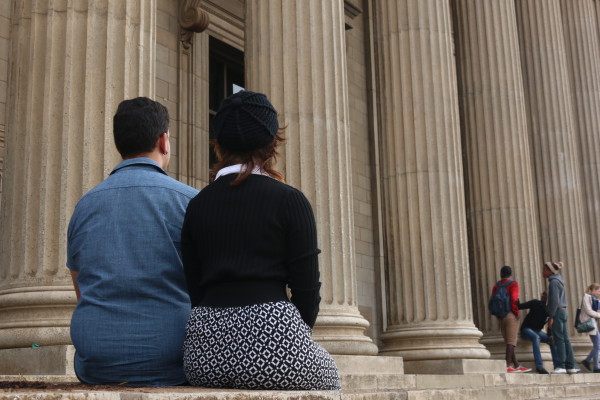 Ivan Sabljak and Danita Botes* said they were watching an informal anti-xenophobia protest on the steps of the Great Hall when Wits EFF supporters reacted to their verbal show of support.

“We were showing them support for the cause they were protesting for and then they showed us middle-fingers and shouted at us in an African language I don’t understand. One guy then picked-up a rock and threw it at us,” said second-year Microbiology student, and Serbian national, Sabljak.

“They shouted ‘pink skins’ and ‘you fucking whities’ at us.”

The Wits EFF supporters, all black males dressed in party clothing, apparently told Sabljak and his first-year Nursing student friend, Botes, they were the cause of xenophobia and should go back to where they came from.

Botes and Sabljak have reported the incident to the SRC (Student Representative Council) and campus security.

“After laying a complaint at SRC Secretary General, Senzekahle Mbokazi, we headed to the Campus Control offices, which are in the Great Hall.

When we passed the EFF guys, they shouted “pink skins” and “you fucking whities” at us,” Sabljak added.

South African-born Botes claims to have told the attackers how ironic it was that they were protesting against xenophobia, while they were trying to kick them out of the country.

Wits EFF chairperson, Vuyani Pambo, told Wits Vuvuzela he is unaware of the incident and cannot comment on the allegations. “We do not condone such behaviour as the EFF of Wits. We must respect everyone who shares space at Wits.”

“This is disgusting behaviour, but I don’t think it’s a real representation of the EFF on campus,” said Sabljak, whose family fled a civil war in Serbia to settle in South Africa.

Campus Control head of investigations, Michael Mahada, has confirmed that he has received complaints from the alleged victims but says he is unable to comment until the investigation is concluded.

*Names have been changed to protect the identity of the individual.