“Africa and her people are one”

Poetry, song, dance and pledges of solidarity were featured in the anti-xenophobia event in Yeoville. 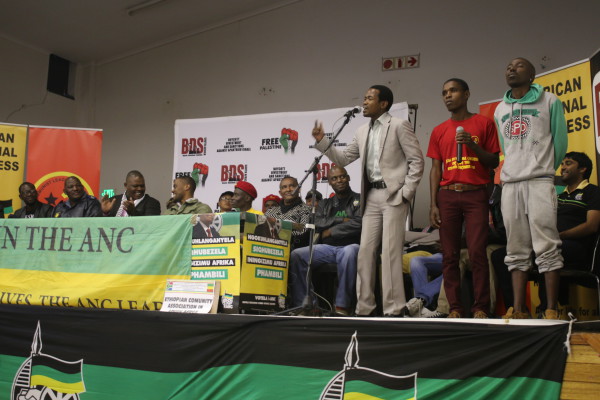 NO TO XENOPHOBIA: Majesty Mnyandu performing his poetry at the Yeoville Recreational Center. Photo: Valerie Robinson

A Yeoville community hall was filled to capacity yesterday afternoon as locals, politicians and youth leaders gathered to show their opposition to the xenophobic attacks currently sweeping the country.

The anti-xenophobia prayer and seminar was hosted by by the Joe Slovo branch of the ANCYL (African National Congress Youth League) and BDS (Boycott. Divestment. Sanctions) South Africa.

The event titled “Africa and her people are one”, featured prominent speakers, poetry in song by Majesty Mnyandu and prayers by representatives of both the Christian and Muslim faiths. The audience, many of whom wore t-shirts saying,  “Je suis afrique” meaning ‘I am Africa’ on them, added to the programme by breaking out into song during the speeches.

“The crowd would break out in song and dance denouncing xenophobia.”

Spokesperson for the BDS programme Kwara Kekana, said that event aimed to “educate ignorant people” that live among us.   Xenophobia affects all of us and that it is everyone’s responsibility to dispel the false notions, Kekana said.