Witsie’s unite beyond Wits borders, to join The Peoples march 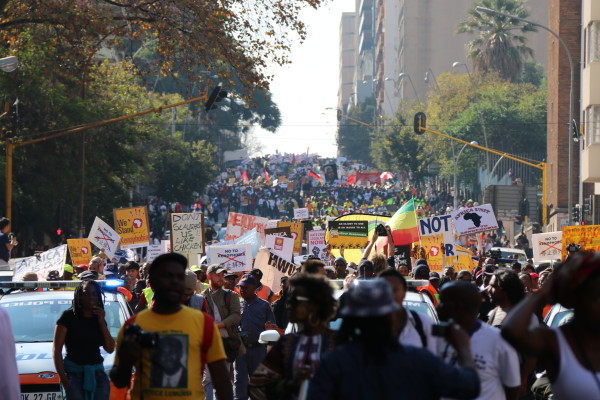 LARGE TURNOUT: Over 30 000 anti-xenophobia supporters marched down the streets of Hillbrow on their way to Newtown today to show their support for the anti-xenophobia march.
Photo: Reuven Blignault.

Today, thousands of people joined the “People’s march against xenophobia”, in Johannesburg and the Wits community, students and staff members were part of this march.

A number of Wits buses were  provided to transport Wits students to the march. Taking them from main campus to Pieter Roos Park in Hillbrow. Buses were provided again at Mary Fitzgerald Square in Newtown, where the March ended to transport students back to Campus.

Vice chancellor Prof Adam Habib said the Wits community stands in “shame” and that is why it was very important for the community to join the march today.

“We putting up an alternative face to the world” he said “these killings did not happen in our name” added Habib.

For the Wits students who attended the march, it was to send a message that “everyone is welcome” in South Africa

Lennon Makuwi, Wits honours student who attended the march told Wits Vuvuzela that the main reason he attended the march was to show the rest of the world and assure foreign nationals that “not all south Africans are Xenophobic or Afro-phobic.”

“We are united here” he said “no one is illegal, but the borders are” added Makuwi.

Lethabo Phasha, a 3rd year Chemical engineering student apologised to the foreign nationals for the behaviour of South Africans and said she hopes that “the perpetrators of violence regret their actions.”

“Let today be the end of xenophobia” said Phasha.

Thabo Moloja, the national Deputy Chairperson of The South African Student’s Congress said that the youth of South Africa are faced with “many challenges including unemployment and inequality”.

“That’s what we should be fighting, not foreign nationals.” Added Moloja.

“But I am happy with the overall participation of the youth on this march” he said “there’s diversity, people from different political backgrounds, racial groups and even nationalities” added Moloja.

Dlanga told Wits Vuvuzela that “xenophobia does not benefit anyone” which is why it needs to stop.

“The people who perpetrated it, are the ones with the most to lose” he added.

For Ngcayisa’s the xenophobic attacks were “disgusting and disappointing.”

He said “it cannot be right after 21years of democracy that we should be visiting such hostility.”

“Nobody deserves to be treated in such in-humane manner, South Africa belongs to all who live in it” said Ngcayisa.