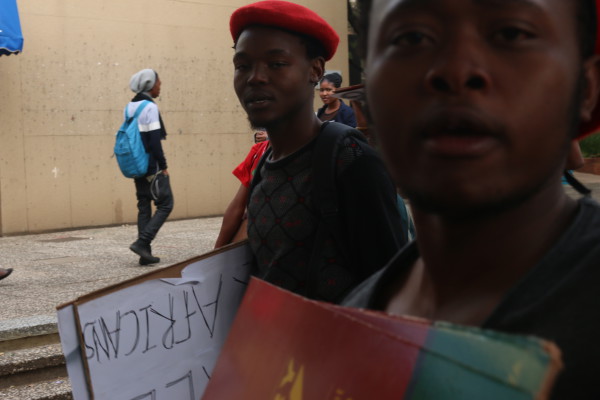 CAMPUS control is continuing an investigation into an alleged racial attack on two white students by the  supporters of the Wits Economic Freedom Fighters (EFF).

According to Lucky Khumela from Wits campus control, the assigned investigation officer is still collecting  evidence including “surveillance footage from the scene”.

The two students told Wits Vuvuzela last week that they were watching an anti-xenophobia protest on the  steps of the Great Hall organised by Wits EFF supporters.

“We were showing them support for the cause they were protesting for and then they showed us middle-  fingers and shouted at us in an African language I don’t understand. One guy then picked-up a rock and  threw it at us,” said one the students, who is studying second-year Microbiology.

“we not hate anyone, we have white membership”

The members of the Wits EFF then allegedly shouted “pink skins” and “you fucking whities”.

Vuyani Pambo, chairperson of Wits EFF, told Wits Vuvuzela in an interview that they do not “hate anyone”,  including white students. “We have white membership,” he added.

Campus control is also investigating a report by a Wits Journalism student who was also attacked by the EFF.

Anlerie de Wet, Wits Vuvuzela reporter, was attacked on campus when she attempted to take photographs of EFF members after another anti- xenophobia march.

De Wet taking photographs of the march outside the Matrix when she was confronted by a several Wits EFF supporters.

Mbe Mbhele, secretary of Wits EFF, confirmed that a confrontation with De Wet took place but said “there was no physical attack on her”.

“The journalist just took a picture of us without asking for permission,” he said.

“When we asked her who she is, why she did not ask for permission, she said this is a public space and that is when the confrontation started.”