Wits’ SRC president, Mcebo Dlamini caused controversy this weekend after he posted a Facebook status regarding whites and the state of Israel: “I love Adolf Hitler”. Following his Facebook comments, he told Wits Vuvuzela that he admired the German leader, who sent millions to death camps, for his “charisma” and “organisational skills”.

Responding to a commenter who wrote “Hitler new [sic] they were up to no good”, Dlamini replied “I love Adolf HITLER”.

When contacted about his comments on Hitler, Dlamini restated his admiration of the fascist leader of Nazi Germany.

“What I love about Hitler is his charisma and his capabilities to organise people. We need more leaders of such cailbre. I love Adolf Hitler,” Dlamini told Wits Vuvuzela.

As the leader of Germany, Hitler is generally blamed for triggering World War II and sending over 6-million Jews to death camps as well as Roma, communists and homosexuals.

“I have had numerous encounters with white chaps. From primary  till today I live with white chaps … As I said, they are not Hitler but there is an elements of him in all of them. I connected the dots,” Dlamini said.

Dlamini further defended his remarks and suggested that his love of Hitler had “nothing do to with white people”.

“I find it very absurd that people expect me to regard their enemies as my enemies,” Dlamini said. “The same way I love Robert Mugabe, it has nothing to do with white people.”

Dlamini told Wits Vuvuzela  that “I will write what I like on my Facebook”  and was not on the social media platform to “nurse Jewish people’s feelings”.

“Who told them they deserve special treatment? This is an academic space, we must debate issues not to silence individuals,” he said. 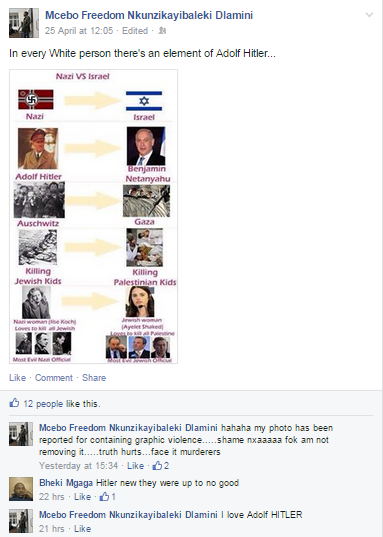