Thembelani ‘Jay Tip’ Gina won the beat-making challenge on Monday at the Back To The City music festival. 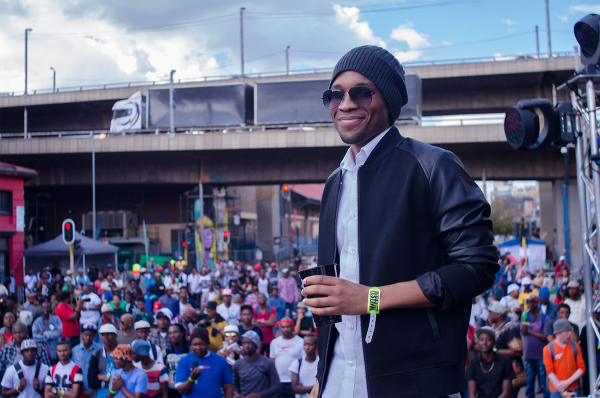 How does it feel to stand in front of a crowd of more than 20 000 people, with the grand prize in your hands? Jay Tip, a Nuclear Energy Master’s student and part-time lecturer at Tshwane University of Technology,  laughs coyly, “well I was very happy. Especially ‘coz the crowd was full of hip-hop heads, meaning they appreciate what I do.”

Thembelani Gina, known to the hip-hop beat making world as Jay Tip, won the Back To The City 10k challenge on Monday, 27th April.

I imagine beat making to be a highly intricate exercise. Requiring patience, as one has to add layers upon layers of sound. All the best beat makers I’ve met have been quiet people. Almost shy. Jay Tip is no different.

“Music is my place of hiding,”

Making music for him is a healing process. “Music is my place of hiding,” he says. But his journey through music hasn’t been easy, or without its bumps along the way. There is a Xhosa saying that I grew up hearing, ‘uThixo akaphi ngasandla’, meaning ‘God doesn’t go out shoving blessings down people’s throats’. Sometimes you just have to get up and start doing things, then he’ll assist you. There is a part of me that wants to believe that- especially considering that Jay Tip entered the competition last year, but was disqualified on a technicality. However another part believes that he is just a talented producer. Finish and Klaar.

The 30-year-old began growing an interest in music in 2007. Moving from KwaZulu Natal to Cape Town to study at the University of Cape Town, he became part of the UCT hip-hop club – meeting and mixing with different rappers, musicians, and producers. The club would not only create and strengthen friendships, but build strong musical relationships that Jay Tip says gave him a voice within the small but growing Cape Town hip-hop scene.

There was a rigorous process to entering the competition. Participants needed to submit their beats and from that a shortlist of 20 nominees were selected. Those 20 nominees needed to campaign for votes online. The 8 nominees with the most votes then battled it out on-the-day at the festival.

The annual festival, which started in 2007 brings hip-hop lovers from across the country to Mary Fitzgerald square in Newtown, Johannesburg.

Jay Tip is still very grounded when speaking about his success.

“I still have to grow. I still wanna work on my music, and improve on some of the things the judges advised I improve on. I have contributed beats to a couple of albums, so watch out for that. But for now I’m gonna go with the flow.”