Protest against the arrest of about 400 foreign nationals 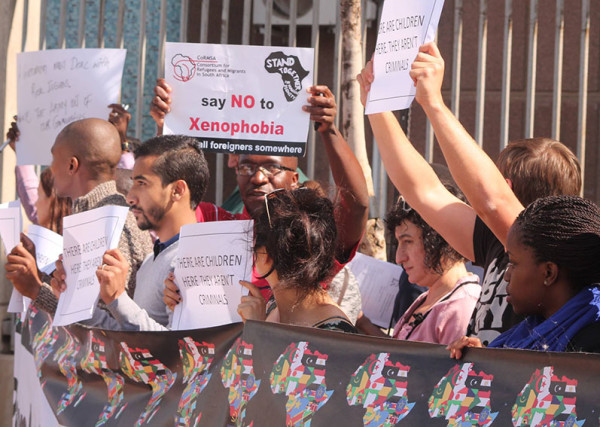 The Coalition of People’s march against xenophobia gathered outside Johannesburg central police station yesterday, protesting against the arrest of more than 400 foreign nationals including 20 women and children under six years of age.

African Diaspora Forum Vice Chairperson Jean-Pierre Lukamba said the police went into buildings throughout the Johannesburg CBD, including the Methodist Church, on Friday at 2am and arrested about 400 people.

Lukhamba said they are not protesting to say the police should not do their job but “people are not illegal, it is the system that does not allow them to have papers, people do not get help when they go to home affairs and the police should keep that in mind.”

Representative of the Nine+ unions Stephen Faulkhel said the manner in which the police arrested people was “inappropriate and disturbing”. There were two South African women who were also arrested and had to plead to go take their identity books. “People were dragged into police’s cars, separated from their papers and detained without charge,” he said.

Faulkhel further said this is institutionalised xenophobia because government believes that when police arrest foreign nationals there will be less crime, “Instead of using 200 police to harass children sleeping, the police should deal with crime happening in communities.”

The arrests of foreign nationals started last week. A member of Sonke Gender Justice, Vital Kabamba said a mother of a four months old baby was detained at Lanesia police station and the baby could not be breastfed.

Approximately one thousand foreign nationals were reportedly arrested through Operation Fiyela, which is created with the aim of cleaning up the streets of criminal elements and keep communities safe across the country.