Students or cars. Who has the right of way?

There seems to be confusion around crossing intersections on campus. Who ‘thinks’ they have the right of way and who really does? 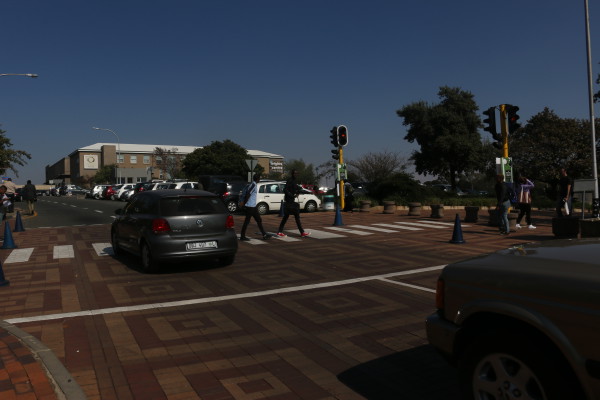 RUSH HOUR: Students and cars both thinking they have the right of way on campus. Photo Valerie Robinson.

The robot connecting east and west campus for many students has become an area of confusion following the university painting a pedestrian crossing in the middle of the intersection.

Most of the student who spoke to Wits Vuvuzela admitted that they thought the pedestrian crossing gave right of way to the students, but at the same time the robot gave the cars the right of way.

“Opting for safety in numbers.”

Tshephang Ntsoane, a BCom student is opting for safety in numbers. He said if the robot is green for the cars, the right of way “depends on how many students there are, so if there are a number of students crossing then the cars have to stop”.

This view is shared by other students saying “sometimes you would find even when the robot is green for the cars people are crossing and then cars will have to stop,” according to 3rd year international relations student Mpho Thahale.