In a final attempt to save their jobs as sub-contractors for Wits University, MJL electrical workers made an impassionate plea to the vice chancellor, Adam Habib, and the rest of Wits management. 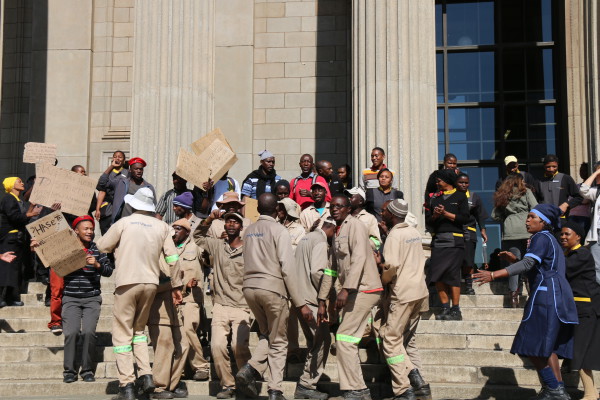 Workers and students gathered at The Great hall before their march to Senate House. Photo by Sibongile Machika

Yesterday MJL workers together with members of the workers coalition gathered outside the Great Hall in what they called “a final act of desperation”.

The workers marched to Senate House to hand over a petition and open letter addressed to Wits University. The petition called on students and staff to put pressure on Wits management to take their request seriously.”

MJL spokesperson, Richard Ndebele said “This petition is about us getting our jobs back, we are asking the university to hire companies that can absorb MJL workers.

About 100 people attended the march including members of staff, students, student leadership and other workers in the university, some of whom are sub-contracted and employed by the university. In solidarity they sang struggle songs as they walked to meet Adam Habib. “Thina siyay’isaba lendawo, yimbi lendawo siy’asaba lendawo yibi lendawo”

In their letter the MJL workers who have been out of work since March blame the University for not doing enough to help them. Workers have been in a salary dispute with MJL Electrical owner George Cresswold since last year. They said that if Wits management acted sooner they wouldn’t be in this situation.

Wits management has previously said it is not the university’s responsibility to guarantee works jobs.  However they are prepared to support the workers in a legal battle against Cresswold as a friend of the courts.