Something for the student hustlers

One of the biggest problems students have is not being able to stretch their money for the entire month. Many are stuck with the dilemma of cutting back every time they receive their allowance, whether it is from their bursaries or parents. Meanwhile other students have what we nowadays call a “side hustle”. This is a way to get money by doing a part-time job that pays just enough to cover costs. By doing this, they do not have to worry about cutting back or, better yet, nagging their parents for extra money.

There are many ways in which students can help themselves get rid of their financial woes at Wits. The Career Councilling and Development Unit (CCDU) has for many years assisted students in acquiring jobs on and off campus. Wits Vuvuzela spoke to Raj Naran, a career development educator and team leader at the CCDU, about the jobs they can offer for students.

“Some campaigns really make it worth it, some really aren’t but it beats being broke,”

“Students can register to be on the CCDU’s database, so that they can be contacted if there are any available jobs,” Naran said. They can go to their offices on West Campus to register. Unfortunately it is not always guaranteed the job they get will be related to what they are studying. Naran said  students can negotiate their pay when offered a job. 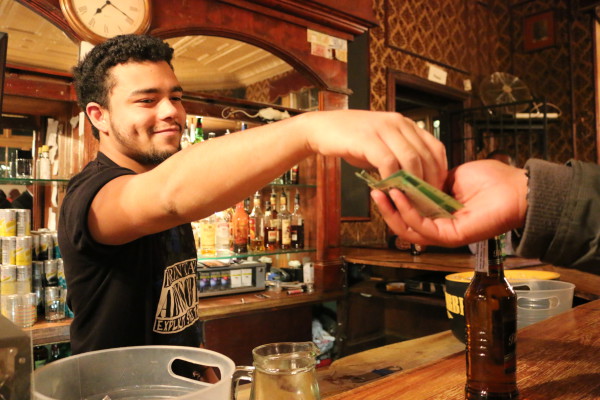 Some students have taken it upon themselves to find fun and interesting jobs off campus. One of the most popular jobs, especially among female students, are promotions. This is considered a great job because it only requires you to work during the weekend. This could be in supermarkets or better yet fancy events, parties and clubs. We all know how students like having a good time and imagine being paid to do so, it is quite difficult to resist.

Bontle-Buhle Ngomezulu, a BCom student at Wits has been a promoter for a year now. She says that the pay can be good depending on the kind of campaign.

“Some campaigns really make it worth it, some really aren’t but it beats being broke,” she said. Bartending has also been a favourite among students, with the variety of bars in and around Braamfontein there is no reason to be unemployed. Lesego Chiloane and Cihangir Cevikem are both Witsies and bartenders at Kitcheners. Cevikem said persistence can be the key to getting a part-time job.

“I asked one of the managers for a period of four months and he kept on brushing me off, until he gave me a chance as one of the cleaners for a month or so and then I eventually got into the bar.”

Besides partying on the job, the one perk which was mentioned was the pay. “The money is really good,” Cevikem said.

“The pay is good, for a student,” Chiloane said. He said working at a bar requires a lot of discipline because you have to balance it with school.