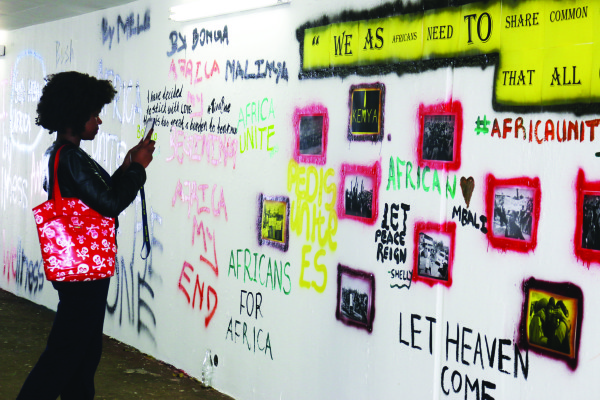 SRC AFRICA WEEK: A student takes a picture of the graffiti on the East/West tunnel. Photo: Zimasa Mpemnyama

THE WITS SRC has organised a week in honour of Africa to create awareness about the issues that affect the continent, though the effort has been hampered by internal politics. Omhle Ntshingila, clubs, societies and organisations officer, said that South Africans were sometimes guilty of alienating themselves from the rest of the continent. “The idea came even before the xenophobic attacks started. The whole idea was to celebrate African pride and to learn certain things about other African countries that we don’t know,” she said.

But Ntshingila said the week was not properly advertised because of internal politics within the SRC. “It was difficult to implement anything because everyone is focused on one issue … People have forgotten the bigger picture. The bigger picture of leadership,” said Ntshingila. However, despite the poor promotion of Africa Week, Ntshingila said she was happy with the reception by students. “The turn-out has been good so far. I don’t like impersonal events, I want people to leave with something in each event, so I am happy with the turn-out,” Ntshingila said.

“The idea came even before the xenophobic attacks started. The whole idea was to celebrate African pride.”
Africa week kicked off on Sunday with a series of tweets from the Wits SRC account, quoting former president Thabo Mbeki’s iconic ‘I am an African’ speech. Official events started on Tuesday with a night of theatre at the Nunnery. Students shared their experiences about xenophobia, and Drama for Life would interpret the stories using drama and performance. “[The show] was awesome because I have never experienced dramatic arts like that. The stories that came from different people in the audience were beautiful,” said Ntshingila.

Some of the events planned for the week included a ‘Generation to Generation’ talk with the theme: “Reconstructing the conversation between African female leaders”, where African women of different generations engaged on issues facing African women in the continent. “The whole idea is to get women of different ages to engage,” said Ntshingila. Students were also given the opportunity to graffiti the East/West Tunnel, sharing messages of solidarity with victims of xenophobia. The colourful messages, “Africa unite”, “let’s embrace our differences” and “embrace who you are man, be African” attracted attention from students passing by.

A collage of pictures paying homage to the victims of the attack by militants on Garissa in Kenya and the Chibok girls abducted by Boko Haram in Nigeria was placed below one of the boldest and brightest messages on the tunnel, a quote from Mbeki, “we as Africans need to share a common recognition that all of us stand to lose if we fail to transform our continent.”
“People don’t even know that there is a country called Western Sahara, and there is also apartheid there,” said Ntshingila, pointing to the importance of knowing more about Africa.