The Muffinz say This Is Afrika (T.I.A)

The Muffinz new album, Do What You Love was released almost two months ago and is a mix of jazz, soul, reggae and hip hop. The messages in the album assert a pan-African identity. 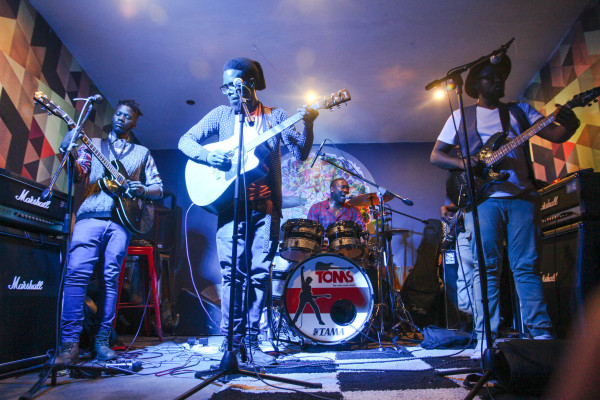 Is the idea of music that connects the “kings and queens tried on trees in New Orleans?” and “Children of the diaspora” possible?

Whose responsibility is it to make the connections between the blood of young black men spilled in the street and the social responsibility that every human should carry?

The Muffinz are a five piece band based in Johannesburg, who started their music career in 2011, but have been singing for years prior to that.

In their sophomore album, Do What You Love, it seems the band has made a concerted effort to make their sound more rooted in Africa. One can easily imagine hearing Alle Sokou in a market in East Africa, or #Standing! Trippin’ But Not Falling and #Beautiful, Don’t Believe The Fools Who Think You Ain’t in West Africa, or Sobaleka on a traditional South African radio station.

“His voice in the chorus is piercing. He sings from the marrow”

The album was released almost two months ago, but received scant mention from mainstream media.

The band, who consists of, Sifiso “Atomza” Buthelezi, Simphiwe “Simz” Kulla, Karabo “Skabz” Moeketsi, Mthabisi “Mthae” Sibanda  and Gregory “Keke” Mabusela, crafted their sound while studying at the University of Johannesburg, one jam session at a time.

The band is made up of four guitarists and a drummer and all the members contribute to the vocals. They all bring different elements to the music and have literally mastered harmonies. There are no histrionics, just guitars, drums, and voices.

Keke – the drummer, sings like he is speaking to the gods. His voice has a warm texture. In the song Ngwana Te, which features the legendary Zimbabwean musician, Oliver Mtukudzi, Keke’s voice literally gives one goosebumps.  He transitions through intricate high and low notes with ease. Keke’s voice comes out shining on this album – blending well with the African theme of the songs.

On the other hand, Atomza’s voice is delicate. Careful. Precious. It takes heavy subjects and soothes them out. Sobaleka speaks of running away from hunger, running towards the sun. In the song, they highlight their disappointment with “our leaders” who “promised us a better life” but are failing to deliver. It’s a call for freedom. In the song, Atomza’s voice comes from a place of pain. Unlike in Do What You Love, where his voice is light, here, it is heavy and serious. His voice in the chorus is piercing. He sings from the marrow.

The album has a jazzy, afro-soul sound, with hints of reggae and hip-hop, and the band moves between these sounds with ease.

A wave of pan-Africanism and black consciousness has hit campuses around the country. Young people are being more assertive about their identity. Their blackness. Though this wave is still at its infancy – still needing to be nurtured and groomed, it functions as a beacon of hope for those who wish to see a more Afro-centric South Africa.

South Africa’s current social situation – high rates of unemployment and crime resulting from structural economic and racial inequalities, is one that cannot and should not be ignored by artists. And in a musical environment where glossy appearances sometimes subsumes real art and talent, the Muffinz have chosen to take the harder, rockier route. This for me, is what separates artists from entertainers. The Muffinz will withstand the test of time, not only because they are talented, but because they respect the art of making music.

Do What You Love is a must-buy album.