Student attacked on Wits bus makes it to graduation

Wits student Sisanda Msekele graduated in the Great Hall today after she was attacked on a Wits bus on Friday night and spent the weekend in hospital.

Sisanda Msekele, a blind doctoral (PhD) student managed to make it to her Anthropology Masters graduation ceremony earlier today despite an attack on Friday night that left her in the hospital.

Msekele arrived late to the Humanities ceremony and was escorted up the Great Hall stairs and into the hall by an unidentified woman. Msekele received her degree together with her guide dog Romy, as both were cheered on by most of the auditorium. Some members of the academic procession rose from their seats to give Msekele a standing ovation as she was capped by the vice chancellor Professor Adam Habib. 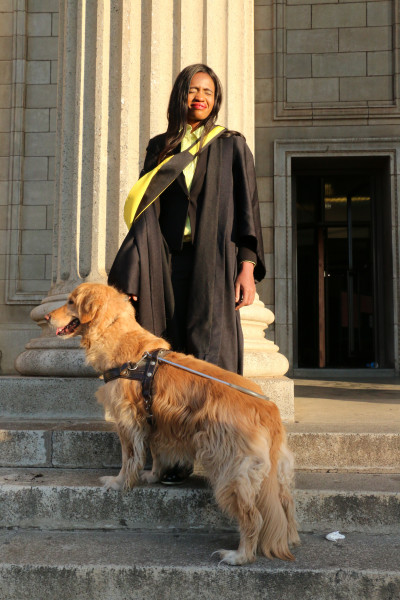 STANDING TALL: Sisanda Msekele stands outside the Great Hall after her graduation despite being admitted to hospital on Friday after she was attacked on a Wits ciruit bus. Photo: Samantha Camara.

Even those in the overflow room could be heard clapping and shouting in celebration. The applause continued for longer than usual and many were moved to tears by Msekele’s achievement. Fellow blind student Melusi Ncala, who also received his Masters degree, was cheered on by the audience when he took to the stage shortly after Msekele.

“I am feeling overwhelmed,” Msekele told Wits Vuvuzela after taking photos on the Great Hall steps with her friends and family.

Msekele was determined to attend her graduation ceremony despite the minor injuries she sustained on Friday night. She was attacked on a Wits circuit bus while on her way home. The attacker is yet to be identified but is a Wits student, according to reports.

Earlier this year, Msekele was almost left homeless when she was denied funding.  She was later given the funding she needed to register for her PhD.