Wits University kicked off the Varsity Football tournament at home  against the University of the Western Cape last night. Wits put up a strong fight despite the goalless draw. Both coaches thought it was a fair result and hoped to build on last night’s performance.

The Wits University Football Club kicked off the Varsity Football Tournament in competitive style yesterday evening against the University of the Western Cape (UWC). The game which resulted in a goalless draw.  Play was even for the most part, but Wits had the edge on ball possession despite fielding eight new players.

“It was a good ice-breaker for the guys,” said Wits coach, Karabo Mogudi. UWC’s coach, Salie Adams felt that “it was a very tough game” for them.

Wits held majority of the ball possession in the first half, but Mogudi said “a few good decisions could have been made and translated into goals.”

Adams said they “gave up ball possession much too easily with poor technicalities.” Two minutes of extra time in the first half did not provide either team with a better goal opportunity. 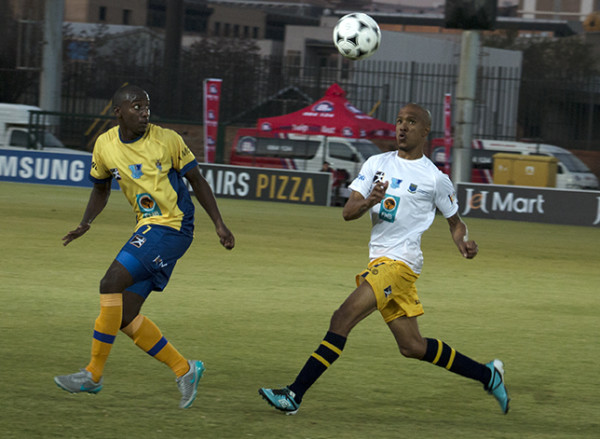 KICK-OFF: Wits kept the pressure on the University of the Western Cape last night as both teams kicked off the Varsity Football Tournament at the Bidvest Wits stadium, Wits University. Photo: Sibongile Machika.

Wits played a stronger game in the second half with a forceful attack and three possible goal opportunities, however they failed to find the back of the net.

“If we remained calm under pressure, we could have converted a lot of those chances,” Mogudi said. “Wits’ main goal scorers let their nerves get the better of them but we can build on this,” he added.

Wits fileded eight new  players, including last night’s captain, Hope Munyai. Mogudi said that as a captain, “He [Munyai] is always solid” and that the team relies on players like him to carry us.”

This is Adams’ second year as UWC coach and he came through with 70% of last year’s squad. He said what let them down was the team’s lack of general fitness.

“Being students, they don’t concentrate on fitness,” which he felt was their “biggest problem.”

Despite this, he said that the result was “a fair reflection of the game,” while Mogudi hopes that Wits’ next game is a greater success.

“Next week I assure you a better performance and I hope the fans come here in numbers,” he said.