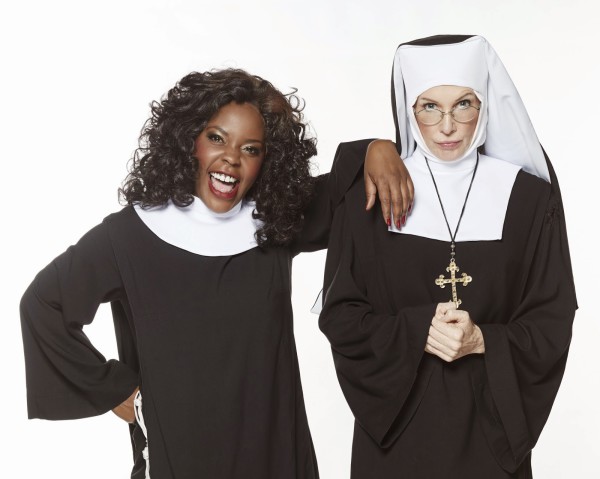 IF YOU grew up in the 90’s chances are you either saw the Saturday night movie on SABC 3 or if you were in a class and your teacher decided to give you a break by watching a movie, you have seen the film Sister Act.

When disco diva “Deloris Van Cartier” (Candida Mosoma) witnesses a murder, she is put in protective custody in the one place the cops are sure she won’t be found, a convent.  Disguised as a nun, she finds herself at odds with both the rigid lifestyle and uptight Mother Superior (Kate Normington).  Using her unique disco moves and singing talent to inspire the choir, Deloris breathes new life into the church and community but, in doing so, blows her cover.

The production stars an entirely South African cast, imitating American accents. Despite a few accent drops along the way, the performance makes the audience believe that they could be in New York watching the musical’s original Broadway performance.

Normington is another one of the show’s shining stars, who creates a memorable Mother Superior and once again demonstrates her amazing singing abilities. Her rendition of I Haven’t Got a Prayer sent shivers down the spine and will be long remembered.

The musical is packed with Alan Menken’s compositions, and Glenn Slater’s lyrics. These numbers are beautifully framed with stunning costumes and amazing backdrops.

All aspects are flawlessly integrated by an experienced director who appreciates the very pulse of a musical that is cleverly aimed to uplift its audience with an ensemble that works hard.

The band, under Rowan Bakker’s command, never missed a beat, yet the sound was never allowed to drown out the singers.

On the negative side, the music has been changed from the original film, so you will be disappointed if you came to the show to hear familiar favourites such as Petula Clark’s hit, I Will Follow Him. But the ‘non-replica’ production of the musical was written by Whoopi Goldberg, and features new songs that any Sister Act or general musical fan will appreciate.

The stage production has been seen by audiences around the world after premiering on Broadway. The New York Times said of Sister Act: “When the wimples start quivering, the pinched mouths break into sunbeam smiles, and the nuns start rocking to raise the Gothic rafters, all’s right in the kingdom of musical comedy.”

Sister Act will run at The Mandela at the Joburg Theatre until August 16th 2015.