Members of the international student associations at Wits University have admitted that there is friction between them and the Student Representative Council (SRC). The SRC drafted an international students’ memorandum at the end of last semester which international students are not entirely satisfied with as they felt their concerns simplified and that were not sufficiently consulted. They plan to meet with Deputy Vice-Chancellor, Zeblon Vilakazi by next week Friday ion order to find a way forward. 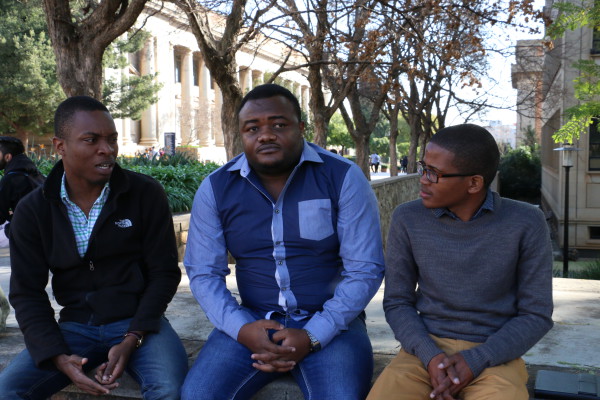 TENSIONS PEAK: Ayotunde Awosusi, Cedrick Tshizainga and Tinovimbanashe Gwenyaya (L-R) are some of the international students’ committee members who are unhappy with the efforts of the SRC in communicating their struggles to management at Wits University. The unhappiness surrounds the international students’ memorandum which was drafted last semester. Photo: Riante Naidoo

“We have to admit, there has been friction between us and the SRC,” said Tinovimbanashe Gwenyaya, deputy president of the Zimbabwean Students Association.

“There was no adequate consultation by the SRC with International students with regards to the contents, as had been earlier agreed during the mass meeting,” Gwenyaya said.

He added that there is an “attitude of patriarchy towards international students,” and stressed that all they want is not to be treated as “second class” students.

Their concerns were jotted down, however the memorandum was created based solely on those concerns.

They added that the memorandum “simplified the everyday challenges” and “realities” of international students. “It failed to highlight issues on the ground,” Gwenyaya said.

Awosusi said the idea to draft a memorandum was raised last year and was an initiative driven by the international students, not the current SRC.

It was however only drafted in May this year as there were “communication issues”.

“Last year’s SRC council did not have an International Students Affairs Officer,” Tshizainga said. He added that even though they created the portfolio this year, it seemed as though the “SRC did international students a favour by appointing someone.”

Awosusi said that “xenophobia amplified the situation,” which speeded up the drafting process. He said their concerns are usually seen as, “the same old, same old, where nobody sees these guys and nobody hears these guys.”

Their aim is to convey their issues themselves, with the SRC as a bridge between their associations and management.

Gwenyaya said “it does not make sense to have a local student as the SRC’s international student’s officer.”

“You’re looking up to a local student to represent you but she does not have awareness about our realties,” Awosusi said. “She’s trying her best to help us but she doesn’t know anything about us,” Tshizainga added.

The international students and SRC plan to meet with Vilakazi by next week Friday, however Awosusi said they are not “expecting a happy response.”

“We just want to hear the challenges international students face in reality as they are not immune to these ongoing challenges.”

Tanya Otto, who is currently the SRC’s International Students Affairs Officer could not be reached for comment.