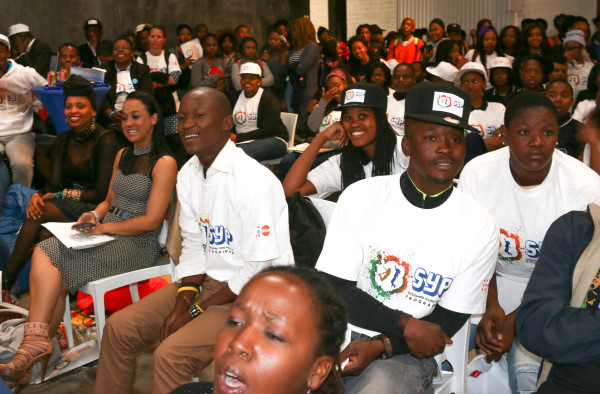 Over 500 hundred young people, from across the East and Southern African regions gathered at the Maboneng Precinct in Johannesburg earlier today to observe International Youth Day.

The gathering was also used to launch a hip-hop album called “We Will”, a collaboration by 7 young talents representing Botswana, Lesotho, Malawi, Namibia, South Africa, Swaziland, Zambia and Zimbabwe.

KrTc, an artist from Swaziland, contributed the song “Jack and Jill”, to the album.

Speaking to Wits Vuvuzela about his influences in writing the song, KrTc said, “I took a story that we are all familiar with, to tell the importance of love and commitment in fighting HIV”.

Zeus, an artist from Botswana described the album as ‘a revisit to hip-hop to real hip-hop.’

According Zues, hip-hop has been “hijacked, its representation today is not what it used to be”.

“Hip-hop is about the community,” added Zeus, it is “not about sex and drugs”.

Speaking to Wits Vuvuzela, the East and Southern African regional officer of the UNFPA, Dr Asha Mohamud, said that these young artists were advocating for change.

“This is their contribution to society through their time and talents,” said Mohamud.

“Every young person here today is advocating for an increase in investment on young people or youth development by their governments,” she added.

This year’s International Youth Day theme is “Youth Civic Engagement”. The theme is consistent with the UN’a focus on the youth as key to sustainable development.