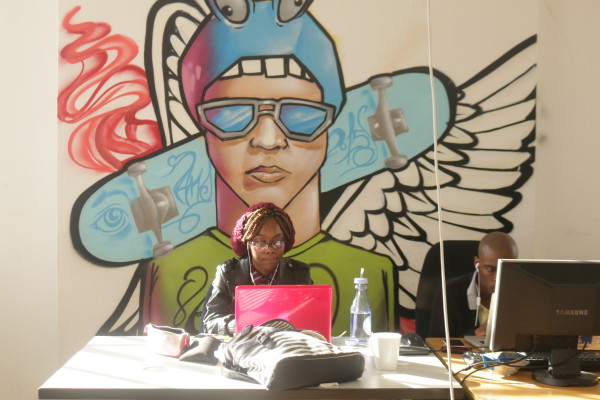 BEING INNOVATIVE: Kamogelo Mphake is an audio and visual creative interning at the DIZ. She joins the group of non-Witsies who use the space to engage and promote technological innovation. A few kick-starters and start-up companies form part of this group as well.

A disused warehouse, with deteriorating signs, open brick walls and grey windows is where digital innovation is thriving in Braamfontein.

The DIZ or the Digital Innovation Zone is a new technological hub and co-working space that has opened on the corner of Smit and Eendracht streets.

The zone was brought to life by the Joburg Centre for Software Engineering (JCSE), a partner of Wits, so that students can share their ideas and become not just users of technology but creators.

“So we building this technology hub in Braamfontein which is a place of new beginnings. It’s really about youth, it’s about creating jobs of the future, it’s about really creating a space for digital innovation,” says the CEO and Director of JCSE Prof. Barry Dwolatzky.

Students and budding entrepreneurs can use the space at a monthly fee.

Xolile Vundla runs a company called the Digital Pad that looks at web and mobile apps as well as games. His prime reasons for setting up shop at the DIZ is that it provides space, infrastructure (ADSL) and expertise.

Vundla also said that Wit’s goals of promoting new ideas, innovation and skills development are closely aligned with his own.

“So I guess it’s a marriage of convenience in the sense that we’re promoting the thing that JCSE at Wits is also wanting to promote at the same time.”

There are also two firms that have taken up permanent residence in the space. One is Bushveld Labs, who create things such as robot orchestras and wireless networking solutions. The other is Trobok Toys who use their 3D printer to create digital toys.

The DIZ is also hosting a number of events to get students involved. One is a mobile app challenge where students are taught how to create an app. This will occur on Saturday 15, August.
There is also a innovation festival – Fak’ugesi, which is taking place from Saturday 22nd of August until Sunday the 13th of September.