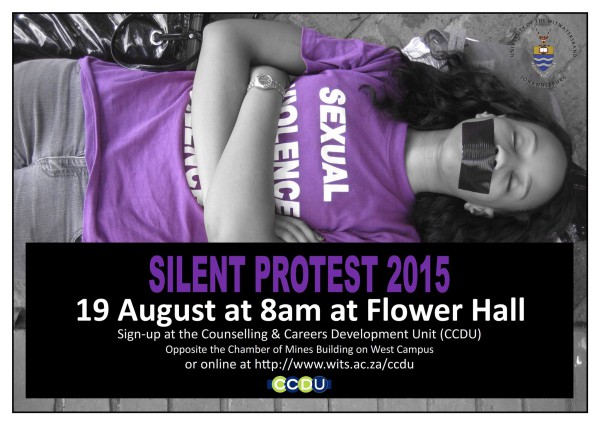 The silent protest will take place on August 19 at the Flower Hall. Photo: Provided

Next weekWits will host its third Silent Protest. The University has been hosting the event which takes a stand against rape, sexual abuse and any type gender based violence since 2013.

“Overall in South Africa, such a shocking number of rapes go unreported. And the ones that do get reported aren’t actually picked up by police, you know the kind of victim blaming” saysBertrand Leopeng, one of the event organisers and an intern phycologist working at the CCDU.

The creators of the initiative at Rhodes University held their version of the protest this past weekend, showing their solidarity over a three day period. It has since spread to other universities such as UKZN and UCT.

2013 was a shocking year at Wits University; multiplelecturers at the university were accused of sexual harassment.  This as one of the reasons students at Wits decided to host this initiative according to Leopeng.

“Those are only some of the reported cases. Thankfully action was taken and our VC moved pretty quickly to make sure Wits is declared a safe zone” saidLeopeng.

“Coming into women’s month, it’s a good time to highlight these types of things. Because you know women’s day it’s kind of a day that is supposed to be about the celebration of women’s rights and things like that, but these things take place year round and we are just trying to amplify it.”

Wits’ silent protest is also taking place over three days. Next week Wednesday is the most active and visible of them all.

“Anybody who wants to participate in the protest can click on the link on the wits silent protest Facebook page. From there they will be asked to choose from a selection of three shirts that will be available on the day” said Leopeng.

Thesign up is free of charge, and allows you to choose a shirt saying either “solidarity”, “survivor” or “silenced.” Members that want to have their mouths taped can also take part in the taping ceremony. According to Leopengthis “symbolizes the silencing that takes place every day when it comes to rape survivors. They can also come to the CCDU, we have our own sign ups there.”

On the day sign-ups are also welcome but there is no guarantee of shirts.

Knowing the true mission behind the initiative is also key, said Leopeng. “Often people get confused and they think that a silent protest is about reporting rape and sexual violence but the thing is if you are going to be reporting it to police who are going to be shaming you”.