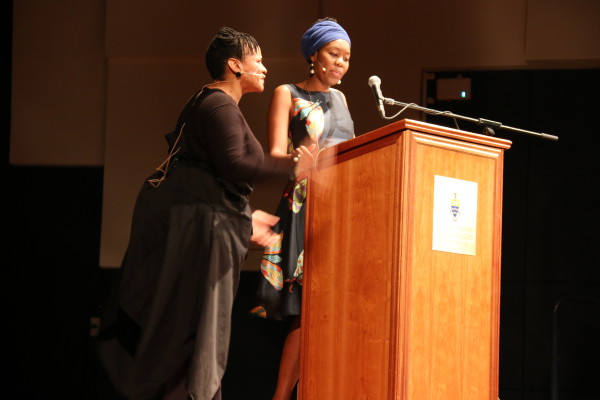 Interracial relationships was one of the topics spoken about at the Ruth First memorial lecture by Sisonke Msimang, which she said is both possible but impossible.

Race in South Africa, while being a social construct, is a term bursting with meaning that can at times be a barrier to friendship.

Part of her presentation involved Lebo Mashile performing pieces taken from actual conversations that were recorded and real events as Msimang put it, “Performing real words on a stage forces us to confront their importance and it moves us beyond business as usual.”

To introduce the topic Msimang spoke about Aristotle’s three kinds of friendship.

The first is Friendship of convenience, where people interact “for example in order to do business or BEE deals.”

Friendship of Pleasure, where if the activity you engaged in, “say drinking or smoking crack”, were to go away there would be no friendship.

And friendship of character, where you spend lots of time together participating in activities that are mutually beneficial. In these friendship a level of trust eventually blossoms. A trust that becomes the bedrock of the relationship and ensures that no interventions are required to sustain the friendship. As the trust means that the friendship is already infused with a willingness to always be just to each other.

So then are your interracial relationships just? Msimange suggests that if whites want to be friends with blacks, they have to replace their distorted idea of the rainbow nation with a less ambitious vision of honesty and respect.

This ideological barrier means that white people may live in the same space as blacks, but they live in different worlds.

In Mashile’s performance she gave an example of how white youthful bonding has at times resulted in black degradation. One was of the admission of Riaan Malan to having sex with a domestic worker.

Another was of “white rage”, where Mashile performed a Facebook post of a white women who said that Apartheid was the best thing to happen to black people as it meant that they were now in a better position than white males. An example of the belittling of black people’s pain.

Msimange contended that if white people were serious about healing racial damage born of our painful past they can send their children to the same school as their domestic worker, celebrate the heroes of black people the same way they do their own and take black feelings and pain seriously. But they must do it all “without expectation of praise and hero worship”.

“If your friends with white people who don’t get it, then you’re not friends,” said Msimang.

If white people want to fit into this non-rainbow nation they have to find a way to squeeze up next to their fellow South Africans and those fellows need to move up to make room for them.

“Can we be friends across these ‘racial’ boundaries? Yes we can. And no we cannot. It’s that simple and that complex,” said Msimang.