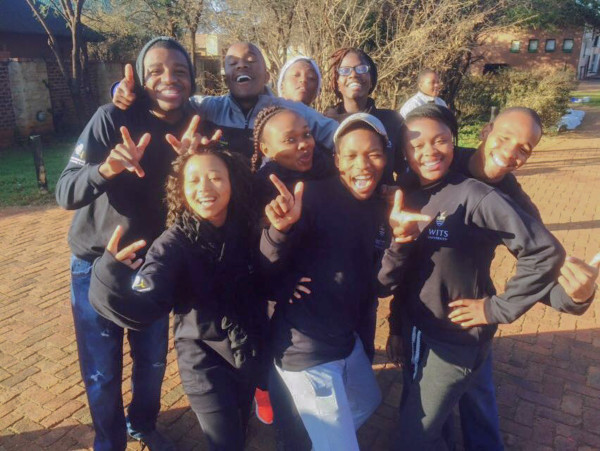 A group of Wits students started a campaign to get students in black communities to change their perceptions around maths.

The campaign, which is called I Love maths- Make it Count, was started by Wits students after they returned from the June Student Leadership camp.

“We are trying to challenge the stigma in our black communities that actually math is fun,” said one of the members Lucky Mqoboli a Game Design (BA PVA) student.

It’s about getting students to not “fear maths” because math is good for your cognitive skills and can help in finding solutions for South Africa’s domestic issues said Mqoboli.

But they are not trying to encourage school kids to pursue math related careers, instead they want to motivate children to think in a mathematical way.

“Math is not that difficult, that’s just the general stigma. You must be friends with numbers,” said Mqoboli.

But they can’t teach students who don’t have the tools to learn, which is why they are collecting calculators and math sets.

“We can’t just teach them math and then they don’t have the tools to do the mathematics,” says group member Ramadimetja Rami Makgeru, Bachelor of Accounting Science student.

“So we are trying to sort of bridge that gap where they don’t have the tools in order to be able to do the maths well,” said Sarah Phiri, Bachelor of Science in Applied Maths.

Next week Friday, August 18, the campaign will be holding a handing over ceremony at Umqhele secondary school in Ivory Park Midrand. So far the campaign has collected under 100 donations for a group of 390 students.

At the event guest speakers will be talking about their experiences with maths and the collected donations will be passed out to the students.

At the student leadership camp, where the idea for the campaign took seed, the group was given a project where they had to find a pressing need in society and address it.

“While at the camp we did a little bit of research and we actually found that South Africa’s education was rated amongst the worst in the world. So clearly there’s something wrong with our math and science education,” said Tsakani Patience Ngobeni, Postgraduate Certificate in Education (PGCE).

Which is why the group decided to reach out to black kids and motivate them to think differently about maths.

“So this is us saying, maths is not that bad, just change your mind set and hence we’re saying I love my math,” said Nqobeni.

The I love math campaign is also calling for Wits students to donate new or second hand calculators and maths sets.

Phiri is asking that students think of donating in this way. “A candle losses nothing from lighting another candle. So if you think of it in that way, then we can be able to make our project a success with each and everybody’s help,” she said.