‘Pretty is the last thing on my list’ this week

The Wits SRC honoured women on campus through a series of events under the campaign ‘pretty is last on my list’ this past week. 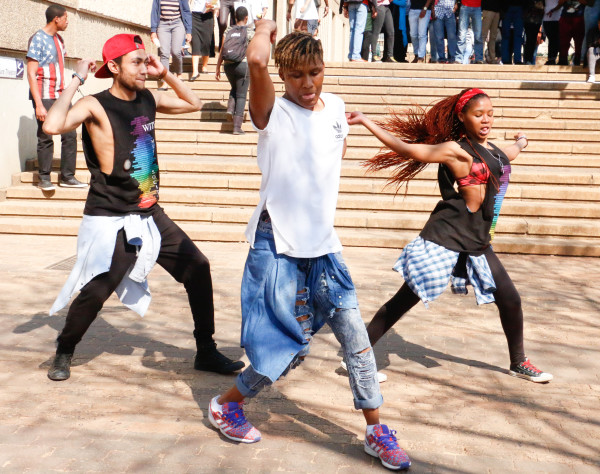 Something for the sisters: Maziya Sibeko, Jason Erasmus and Abby Molema do their street dance for the SRC talent show. Photo: Anelisa Tuswa

The Wits SRC (Student Representative Council), hosted a week full of events titled ‘Pretty is last on my list’ to the empowerment of women. From a battle of the sexes competition to an outdoor talent show, the week brought out the talent in Witsies.
Speaking to Wits Vuvuzela, Blaise Koetsie, the SRC projects, media and campaigns officer said this week (17-21 August) is dedicated to breaking stereotypes and showcasing that “there’s more to women than their exterior.”
“We also want to get men in our society to celebrate women beyond their bodies and faces,” said Koetsie.
One of the objectives of this campaign was to give women different platforms to express themselves.
The launch kicked off on Monday with a variety of mental and physical games between men and women.
“That was just a minor way to show that we are equals,” added Koetsie.
Tuesday’s programme included an outdoor talent show where students performed poetry, danced and sang.
One of the performances included Thandiwe Lerato Sekhibane’s, contemporary dance piece called The costume doesn’t fit, which was dedicated to full-figured women.
Sekhibane told Wits Vuvuzela that said she hasn’t performed since her matric year (2008) and that this was her “return”.
Her performance was meant to “express the struggles” a young woman in performance and academia goes through. She is not only a dancer, but also masters student in Science Education.
“The expectations that people have of you are ridiculous,” said Sekhibane. “Things like you must be small, you must fit a particular genre, or you can’t dance if you are this size.”
Chaanice Lee, 1st year BA, sang Pretty hurts by Beyonce. Her performance was dedicated to women who struggle due to “beauty standards” set by society.
“I feel like I’m one of those girls that are not pretty or beautiful enough even though we try.”
The ‘pretty is last on my list’ week also hosted the Silent Protest against sexual abuse and violence on Wednesday.