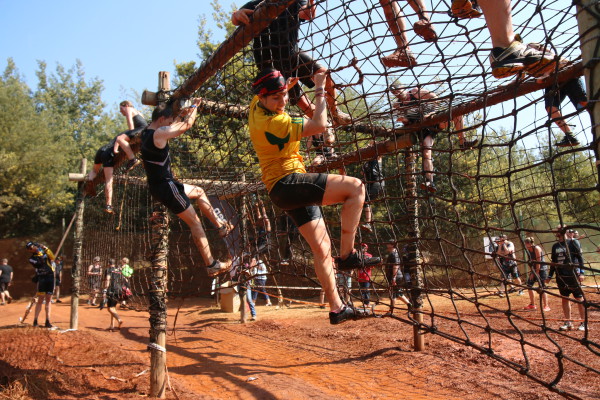 OBSTACLE RACING: Warrior race is a obstacle course race where you get to climb, jump and swim your way to the finish line. Here I’m climbing down from the Net Monster after going in for a dip in an ice cold water obstacle. Photo: Samantha Camara.

“Warriors, Be Brave!” we shout as my teammate and I jog in place at the starting line of this year’s 6th Warrior Race.

The Jeep Warrior Race is the largest obstacle course race in South Africa annually spanning eight events across four provinces with up to 9000 people attending an event.

This is the third Jeep Warrior Race that I have entered with my team, the Teenage Mutant Ninja Kittens. Though there was only two of us, and we are the least fit members of our teams. I actually thought this was better as I didn’t need to try and keep up with my other faster friends.

Even though it was my third race I still got nervous before the course, worrying about how difficult the obstacles would be and if I could actually complete them.

This was made worse by the fact that if you don’t want to complete an obstacle you have to do 20 burpees, a squat-push-up-jump combination that is as tough as it sounds.

I always enjoy arriving at the start line as they have pop music playing and announcers to psych you up.

Minutes before the start we are asked by the announcers to run on the spot, jump up and down and side to side. All the while riling us up by shouting “Warriors!” as with respond with “Be Brave!”

The announcer, with a voice that sounds like an American hype-man from a sports game, said that he would like to congratulate us for coming as “It’s a long way from Facebook to being here.”

The obstacles can at times be fun but at others, not so much.

Tangled, the eight obstacle, was surprisingly the most challenging one for me. This was made up of a number of chest high logs that you climbed over while being draped by a loose net. As I tried to climb over the logs I kept being bumped over by other people and almost slipping off onto the floor, shouting out, “Fuck, I’m falling!”

I tried to run between the obstacles as much as I could, but as the obstacles became more difficult so did my attempts at running.

My favourite obstacle came next, called the Raging Rapid, the highest obstacle and a water slide. Here all I needed to do was sit on the edge, arms folded and let myself slide into a pool of muddy water.

The last three obstacles were also all water based, which is good as I got to wash off the mud. There was the Danger Swamp (where I felt as if I was in the army crawling under barbed wire), Slippery Dip and Tower of Rage.

I always look forward to the Slippery Dip (better known as the ‘mud monster’) a challenging but fun obstacle, a 100 metre stretch of mud with three metre humps and dips.

I struggle to get over the humps at this obstacle, since I don’t have the arm strength to pull myself over them.  But it can be relaxing, floating on my back in the dips and backpaddling in the mud pools.

The Warrior Race always ends with the Tower of Rage, 6.3 metre and 4 metre (either one is optional) platforms that you jump off of into a pool of muddy water. Four meters doesn’t seem very high, but I always get nervous when I stand at the foot of the platform.

After internally shouting at myself to jump I took one final splash into the water. In a last effort to pull myself out of the water I get on my feet and bolt to the finish line.

We were then surprised to discover that we had beat out teams previous time by 40 minutes, which we celebrated with a victory hug.