Nineteen year old actor, film and television student Travis Hornsby is young but no rookie. He has already rubbed shoulders with A-list actor John Cleese. A pole fitness enthusiast and dance instructor, Hornsby says he “wakes up like Beyoncé and falls asleep like Buscemi”. The Spud actor sat down with Wits Vuvuzela and this is what he had to say. 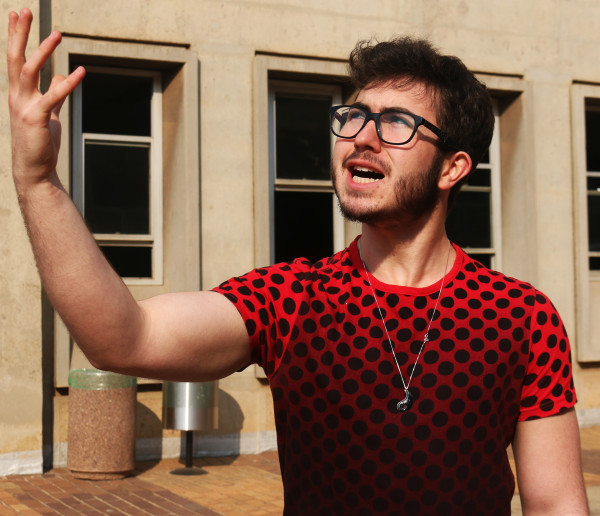 RISING STAR: Travis Hornsby aka ‘Boggo’ is a rising star. Hornsby has featured in ‘Spud’ the movie and has rubbed shoulders with A-list actor John Cleese. Photo: Litaletu Zidepa

Did you read the book (Spud) before auditioning?

Indeed, I read the series, and had to re-read the first book to get a grip on the character. Reading the fourth book was a surreal experience for us all, though. John Van Der Ruit wrote it with us in mind, so it was disconcerting at times to discover what he truly thought of us.

I only got wind of the auditions several weeks into the casting process, when call-backs had already been held. I messaged the producer directly and requested a late entry, and he suggested I write and upload a Spud-inspired monologue to YouTube. The result was a campy blend of the Rocky Horror Picture Show, Spud and Mean Girls. In retrospect, it was absurd.

When you first got the news about getting the part, what did you do?

Forged an ID and burn my Afrikaans essay due the next day.

How was the experience of playing the character ‘Boggo’?

I found the character difficult to reach at first. Boggo represents a lot of things I strive to avoid. He is crass, arrogant and stylish. Eventually I grew to love him. Even if he smuggles poor-quality pornography under his mattress and swindles schoolchildren.

How was filming with the Crazy 8 members?

We became a second family to one another. We are all still in regular contact with one another, even though we’re so far apart – separated by a continent, with regards to Troye (Spud). We’ve seen each other grow and mature, as professionals and individuals. Having lived together for so many months, there are no secrets amongst us, regardless of our different backgrounds, ages and disciplines.

How was the experience of working with legendary actor John Cleese?

John is phenomenal, both professionally and socially. He holds himself with an unbreakable charisma while still boasting a familiar modesty that is, in a word, inspiring. He went out of his way to mingle with everyone on set, no matter their role, and readily shared his witty, often dark humour. A crew member bore an uncanny resemblance to Hugh Laurie – one day Mr Cleese took a selfie with him, sent it to Hugh on twitter and captioned it ‘Posing with a fan :)”.

It must be hard to memorise lines as an actor. Any tricks for aspiring actors?

On film it’s incredibly easy. We learnt our lines for the day every morning while in the makeup and wardrobe trucks. One rarely gets an opportunity to say much before a shot is cut, and the camera angle is changed. In theatre I find that lines are only learnt through repetition and a genuine

Is there space for young actors in South Africa?

Yes, yes, yes. The industry is as competitive as the Hunger Games, but passion never fails to benefit. The beauty of the art is in the sacrifice. Actors sacrifice their financial security, they sacrifice relationships, their petrol, driving to and from castings, and ultimately themselves.

What are some of the lessons you’ve learnt from John Van Der Ruit’s Spud books?

Everyone is insecure. Don’t miss an opportunity to place yourself amongst people you know nothing about, and open up. Therapy is free. And if you want to get away with murder at an all boys’ boarding school, don’t keep a diary detailing your exploits under your bed. Amateur.