What’s the deal with DASO?

With DASO being occasionally mocked on social media and at circuses leading up to the SRC elections this year many are wondering, what’s the deal with DASO? 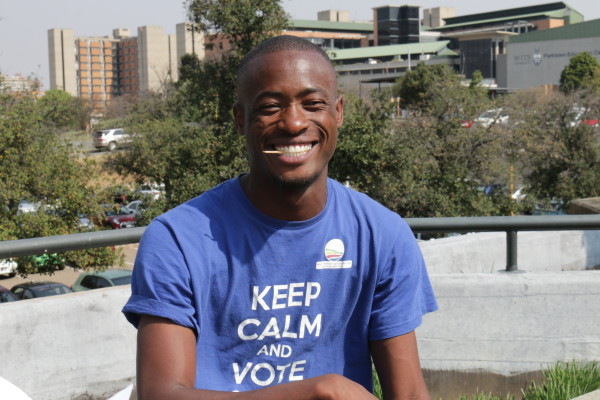 DASO who?: Floyd Nyalungu explaining why DASO is the way it is at Wits. Taken at Medical Campus during elections earlier this week.  Photo: Tanisha Heiberg

It’s the last circus before the SRC elections, a Project W member got up to tell the Democratic Alliance Student Organisation (DASO) that he thought it was “cute” that they are trying to run.

The comment shows the dismissive attitude that many student politicians have towards the DASO candidates, as the organisation has struggled to gain any traction during this election.

When DASO’s campaign manager, Floyd Nyalungu, was asked about this particular incident he laughed and joked that “other students even call us ‘DASO The Legacy” in reference to the popular TV soapie Generations, now known Generations The Legacy.

But Nyalungu, PG Law, is looking on the bright side, “cute represents something good”, he said.

DASO have only six candidates running for SRC while rival organisations Project W and the Progressive Youth Alliance (PYA) each have a full slate of 15.

One of the points raised at the circus was the view that DASO is ‘dying’ and Nyalungu attributes this to their lack of visibility. “The reason people say DASO is dying is because they didn’t see it on campus and that is because previous structures could not coordinate activities.”

Nyalungu added that the graduation of some executive members on an annual basis has affected the depth of leadership of the organisation.

“The important part is that we are here now and if we see a problem why not try and address that issue.”

Despite Nyalungu positive outlook, many Wits students seem to feel sorry for the organisation. The DASO tent has been a point they have been mocked and criticised when some people noticed that it appeared to be a DA tent with an additional “SO” handwritten in white paint.

But Nyalungu said that what looked haphazard was a conscious decision so students can see where they come from and who they are.

“Most student didn’t know what DASO is, but there is branding for DASO … and I believe next year we will actually be using our DASO gazebo,” Nyalungu said.

Even with the eventful lead up to these elections—loud debates, fights, scuffles and lawsuits—DASO seems to be missing from the action, a move that Nyalungu said is part of their philosophy.

“I remember even at the Great Hall when people were fighting we were just sitting there, just folding our arms, but ja that’s how we believe leadership should be. When you have a problem you sit down and solve the issue instead of physically confronting each other,” said Nyalungu.

“We are hoping we can share much of the office with Project W and [the Progressive Youth Alliance], but unfortunately EFF is not here,” he said.

When asked how they have been experiencing the reaction to DASO running for SRC again he said it was very “positive”. Nyalungu said there have even been calls made to the Cape Town office asking where DASO Wits is.