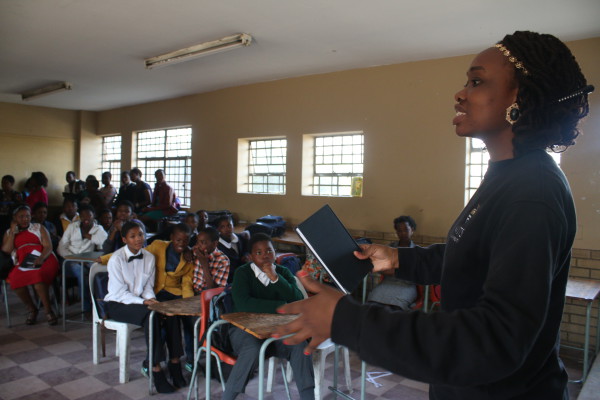 LOVE MATHS: Tsakani Patience Ngobeni one of the members of the campaign speak to a class of grade eights at Umqhele Secondary School about changing their mindset about maths. Photo: Dana Da Silva

A combined class of grade eight students enthusiastically participate in a  game to get them focused during a visit from the I Love My Maths: Make it Count campaign at Umqhele Secondary School.

“The I love math campaign is a campaign where we go out to school children and encourage them to love maths, to have a passion for maths so that they will be able to conquer it,” said one of the creators of the campaign Sarah Phiri, a Wits applied maths student.

Last week Friday the campaign visited Umqhele Secondary School in Ivory Park, Midrand, during the school’s career day. Members of the campaign along with a guest speaker shared their stories about journey with maths and gave maths sets as prizes in a maths arithmetic game.

They played various other singing games with the students to get them focused as well as to distribute maths sets and calculators.

The guest speaker Mafule Moswane, an Honours in geography and environmental studies student, was invited to help encourage kids to have a passion for maths.

“So the idea is to change the mind set and introduce a paradigm shift so that the young people can love maths and also give them reasons why they should love maths,” said Moswane.

He also said that kids should love maths because it can take them places. “Talking broadly about it, in fact when you are doing maths you can do anything anywhere in all the universities. But if you’re not doing maths you are limited only to specific career paths,” he said.

For one of the students at Umqhele, Manube Mangatane, this is the first time she is seeing a campaign like this visiting her school. “So it’s a great experience and I’ll always put it in my mind and I’ll remember that they came to donate calculators and maths stuff to our school,” said Mangatane.

She also said that this campaign is a good idea for people who can’t do maths as it is very important to know these days.

Dipole Motilabine, another student, is doing maths because he doesn’t want to “be a fool forever” which is why he wants to be a civil engineer.

“Many careers and jobs they need maths. So I think maths is the key. I really want to study it and know it like other learners.”