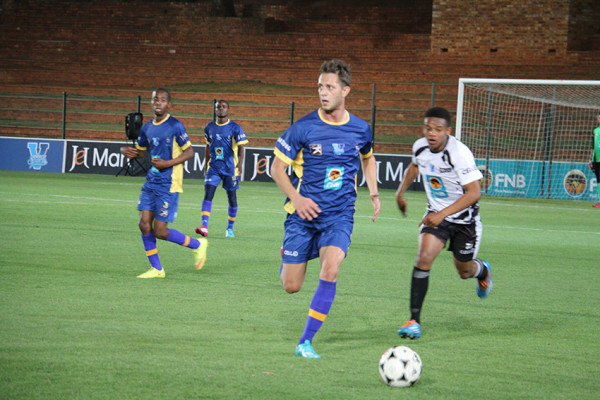 ON THE REBOUND: Wits’ Aleksandar Kocic put pressure on the WSU defence on a break away. Photo: Reuven Blignault

Wits FC will play in their first-ever Varsity Football semi-final after they walked away with a 2-1 win over Walter Sisulu (WSU) at home on Monday.

An elated Wits coach Karabo Mogudi expressed that while he was happy for the team, it has been a stressful week for them.

“Every coach and team wants to win matches, and we are peaking at the right time, but this week was the worst for the players because its test week, I can see a lot of them didn’t sleep. This was evident with the start of the match, we were very poor,” he told Varsity Sport.

Wits started off as the more impressive of the two teams and dominated play in the opening few minutes. Wits’ Gift Baloyi had the game’s first attempt at goal.

The away side held their own though and took the lead with a goal from Bonke Mbadlanyana.

The visitors from the coast pushed forward in the second half and almost achieved the same number of opportunities in front of goal as they did in the first ten minutes of the game.

With a semi-final spot at stake, Wits gained momentum by applying continuous pressure on the WSU defence in the latter part of the game.

Goals by Saluleko Mathonsi and substitute Graeme Dor completed a great comeback in the dying minutes of the game for the home side.

This was the second consecutive fixture where Wits left it till late to secure a victory and have now increased their chances of making the next phase of the competition.

In the previous match, Wits came out firing but were unable to score against Vaal University of Technology (VUT), and managed only a draw.

Wits’ next semi-final match will take place on September 10 against an unconfirmed opponent.