‘Peaceful’ elections but flashes of drama 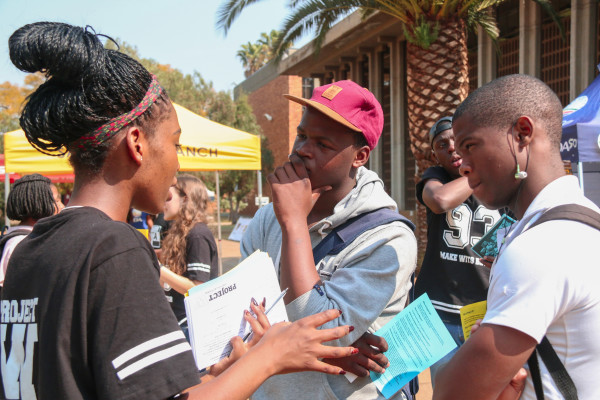 THE 2015 SRC elections started with a lot of cancellations and some near expulsions. However, despite the hitches leading up to the actual voting days Jabu Mashinini, Wits chief electoral officer said “the elections were vibrant and exciting but very peaceful.”

On August 18, the opening event of the campaign, an SRC debate, was cancelled when Wits EFF took over the stage chanting “NO SRC” resulting in a brawl. The fight led to the suspension of seven students, later overturned by a court order, as well as the disqualification of Wits EFF from the SRC campaign.
The expulsion of the Wits EFF is not the only hiccup that occurred during the campaign. Also impeding the candidates’ campaigning was the cancellation of residence circuses and the cancellation of the debates in the Great Hall, Main Campus and the Education Campus.
But according to Mashinini, the only struggle presented during the actual voting period was “removal of candidates’ posters.”
However, many candidates do not agree: “The elections were democratic, but rather not in the spirit of democracy” said Thamsanqa Pooe, a candidate from Project W.
Pooe believes that students didn’t have enough options “especially the strong left-wing”.
However, Floyd Nyalungu, a campaign manager for the Democratic Alliance Student Organisation, disagrees that Wits EFF should have been included saying it “would have been undemocratic, because they broke the rules.”
“Overall, the elections were democratic,” Nyalungu said.
Mashinini defended the cancellation of the circuses and debates, saying that it was the right of the Wits elections office to do so.
“Debates and circuses are platforms created at the discretion of the elections office to expose candidates to the student body,” explained Mashinini. “They are not mandatory”.
Speaking to Wits Vuvuzela, Omhle Ntshingila, a Progressive Youth Alliance (PYA) campaigner, said the cancellation of the residence campaign affected every political party because “people didn’t get a chance to interact with the students on a personal level.”
However, “for the PYA, it gave us a challenge of being strategic and more creative on the way that we campaigned and engaging with students,” said Ntshingila.
Kagiso Nkudimeng, a Wits student, told Wits Vuvuzela that he did not vote and he “will never vote because the SRC is just another wing of the university”.
“These political parties, just want to get into SRC and wear the blazers,” added Nkudimeng. “And not represent students.”