“Habib will never get this one!”

Student residents of Wits University residence, Parktown Village (PKV), staged a protest following an unofficial announcement that parts of the village will be sold to the Wits Business School to build more parking and office space. 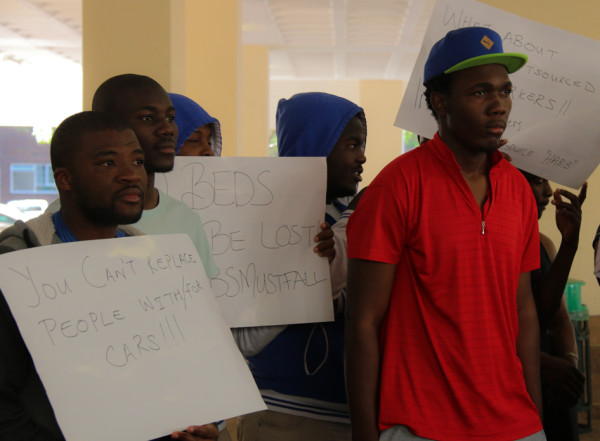 Some residents of Wits University residence Parktown Village (PKV) staged a protest outside the gates of the Wits Business School (WBS) earlier today. Joined by some cleaning staff and students from neighbouring residences, the group chanted “uHabib akasoze ayithole le” (Habib will never get this one), as they protested against a possible appropriation of the residence to extend parts of the WBS.

Stopping outside the WBS entrance for over an hour, the group of about 100, handed a memorandum to deputy vice chancellor, Professor Tawane Kupe. The memorandum addressed a number of issues including the possible sale of the residence and its conversion into a parking lot for the WBS. Kupe could not respond to the memorandum as the students refused to let him speak insisting instead that he was just the “messenger”.

Deputy chair of the All Residence Council (ARC), William Mokone, said the issue came into the ARC’s attention four weeks ago in a meeting with university management, which indicated that “at first they wanted only three houses”.

“A week ago, Mr (Rob) Sharman called me into a meeting, he even showed me the plans drawn out,” added Mokone, “PKV is only going to have 8 houses remaining … and the rest is going to be turned into a parking lot.” Sharman, the director of Campus Housing & Residence Life, was not available to comment as he is out of the country.

Pandelani Nekhumbe chairperson of the PKV house committee told Wits Vuvuzela that “there has not been any formal contact from management to the house com or to the villagers.”

“We cannot have villagers stressing and worrying at a time when exams are just a doorstep away,” added Nekhumbe,“especially on an issue that the house comm was never made aware of, and students were never consulted.”

Gloria Phasha, 5th year medical student and PKV resident,  said the residence is the only convenient and affordable accommodation for her.

“Where are we supposed to go to next year? Junction is too expensive,” she said.