Differences over ‘misinterpretations’ of Black consciousness at Steve Biko lecture 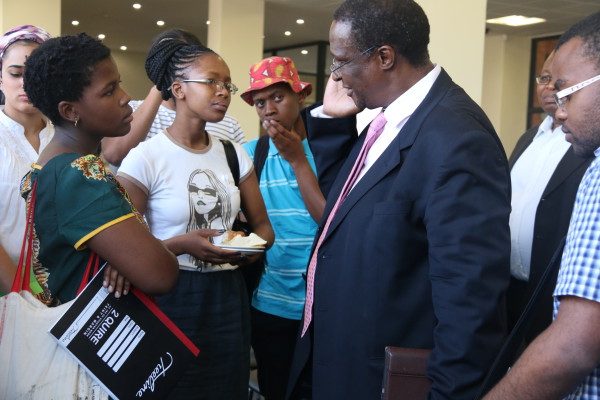 THINGS GET DOWN: A group of students came to Professor Barney Pityana to “engage” on black consciousness after delivering the Steve Biko Memorial lecture at Wits Public Health school yesterday. Photo: Sinikiwe Mqadi.

The annual Steve Biko Memorial Lecture ended in disagreement yesterday when a group of students accused speaker Professor Barney Pityana of “misinterpreting what Biko meant”. The lecture which took place at Wits University was delivered by Pityana with a speech titled: “Transformation in higher education: What is to be done?”.

A group of disgruntled students approached Pityana after the lecture to challenge some of his interpretations.

“I wish uBiko uyakupokela la ukhona,” (I wish Biko can come after you as a ghost), one of the student was heard telling Pityana. When asked to explain the disagreement, the students refused to comment, but one of them said, “Sistaz you need to understand that this is not a good time on campus, we are scared because you never know when you can be expelled, please understand that,” said one student.

Pityana told Wits Vuvuzela said it’s good that students engaged with him and he will be available for further conversations. “It’s good, ideas are like that they float and bang bang, but you need to know that your own ideas are not the ultimate, your ideas are challenged and challengeable … the idea is that the university is not a one way thing … first of all one has to stop and think,” he said.

Pityana’s lecture acknowledged the radical approach of some students at South African universities, but he emphasised the need to accommodate many voices in moving towards change.

“Students and [their] voices are not and need not be, and should not be uniform … Each one though is often expressed as if it’s the only thing possible, a sole truth and nothing but the truth.”

In explaining how the ideas of black consciousness is relevant to current debates about transformation, Pityana said,“black consciousness was a state of mind and a way of life, ideas in themselves do not liberate, ideas are necessary and instruments to inform, drive and energise human and liberate reaction”.

Pityana said today there is a need for a deeper understanding of black consciousness because power relations are different. He also said that “unconscious scholars can easily become an unwitting tool for oppression.”

“I believe when the intellectual is rootless and disengaged from their own communities and no longer feels the parts and heartbeats of the oppressed, the intellectual who is the middle man has neither life nor future.”