Activism becomes a calling for an electrician 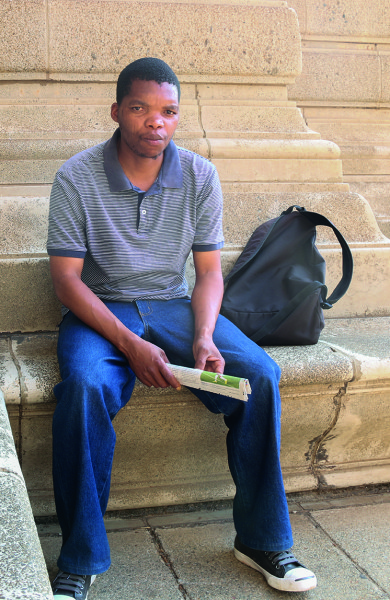 “If you called me Mazankosi I would give you anything you want,” Richard Ndebele said, smiling and giving his Zulu clan name.

Ndebele had arrived late for our interview. “I’m coming from a solidarity meeting,” he said, apologising. “It’s hard, but I can’t stop fighting now. Our families are hungry. Wits management doesn’t care about uneducated people,” he said in English and Zulu.

Ndebele, 39, matriculated in Msinga, KwaZulu-Natal, and then came to Johannesburg, looking for work in 1995 – a year after the first democratic elections.

“During that time you had to come to big cities like Johannesburg to make it in life.”

Initially, he found only temporary jobs paying less than minimum wage.  He pursued an electrician’s certificate, and his diligence was rewarded in 2011, when he was hired by MJL Electrical, a firm contracted by Wits to maintain its electrical systems.

Problems for Ndebele and his 22 co-workers began late last year, when MJL began paying irregularly.  Their work was also obstructed because MJL was not purchasing the material needed for electrical maintenance.  They complained to the Wits administration, to no avail.

In February they discovered that the money deducted from their pay for unemployment insurance and pensions had never been deposited to the appropriate accounts. The employees filed a complaint with the Wits Legal Office. They also asked the Wits community for support.

Ever since, MJL workers have been struggling to recover their wages and unemployment benefits.   Ndebele has emerged as their leader. “These people had a union that is supposed to help them, but it has failed.  Now they have no one to help them. So, I took it into my hands that I will help,” Ndebele said.

The MJL workers hold Wits management responsible for their lost jobs.  “We reported everything.  Wits had time to sort things out, but they were not interested in helping us.  They should have found a way to monitor this company, or investigate. But they continued to protect our employer, while he was abusing our rights and stealing our money.”

Ndebele has kept copies of the photos and correspondence he sent to Wits to report the problem, and audio recordings of meetings with Wits administrators.

Alfred Zuma, another former MJL worker, also blames Wits management.  “We reported everything, but they chased us away, instead of helping us,” Zuma said. “I thank Richard for standing up for us.”

The decision in 2000 to outsource service workers at Wits followed outsourcing at other universities. This nation-wide move towards privatisation arose from government economic policies. Cost cutting became paramount, and services were outsourced to achieve it.

Outsourced workers suffered losses in pay, benefits, job security and dignified working conditions.  “The problem here at Wits is that, as contractors, we are not treated as people. They treat us like tools – because you use the tool, and when you are tired of it, you just throw it away,” Ndebele said.

When the MJL workers asked for community support, the Wits Workers’ Solidarity Committee was ready.  They joined the workers in launching a series of actions, twice occupying the office of MJL owner George Cresswold, demanding payment.

Eventually, Wits agreed to redirect funds owed to MJL to pay workers’ back wages.  But Ndebele said the payment again fell short.  “Wits paid for 17 days but we were supposed to be paid for 23 days.”

During an April 16 Town Hall meeting with Vice Chancellor Adam Habib, MJL employees entered the auditorium carrying signs and stood silently at the front of the stage throughout the meeting.  Ndebele’s sign said: “We are starving.”

The electrical workers asked Wits to employ them directly. Habib said Wits could not afford it.  The costs would double, and higher payments for insourcing would have to be offset by increases in student fees. “MJL workers have been treated badly by their boss. Wits does sympathise. But we cannot employ the workers” Habib said.

MJL has been liquidated, but the MJL workers have still not received their wages or unemployment benefits.

“We were told by the Department of Labour that our Pay As You Earn numbers are invalid, and we can’t claim, Ndebele said.  “The liquidator told us the money will be paid to registered creditors, then, if there is ‘change’, we will also be paid.  So, we are losing hope now, and there is nothing we can do.”

“We didn’t know that we could be violated like this in 2015.  You would expect something like this to be done by the apartheid government.”

Still, their struggle has stimulated significant commitments from Wits.  In a May 21 communiqué, Habib promised that as a “stop gap” measure, Wits would monitor outsourcing companies to ensure they comply with workers’ rights.  For the long term, he proposed strategies to win an increase in government support, allowing Wits to insource service workers without increasing student fees.

The MJL workers are still jobless. The other outsourcing companies have declined to hire them.  Ndebele believes the companies view him as trouble.

Adam Habib offered a suggestion.  In his August 8 Town Hall meeting, he encouraged workers like Ndebele and his colleagues to form worker cooperatives, and compete for the contracts.

Ndebele doesn’t see cooperatives as a solution, though. “Registering a company is expensive, and workers will end up fighting with each other,” he said.

Today, Ndebele divides his time between any part time work he can find, and pursuing MJL workers’ rights.

Leaving our meeting, he was on his way to KwaZulu-Natal. His son had been suspended from school because he couldn’t afford to buy a calculator. In rural KZN, it is common practice for learners who fail to bring the required supplies to be excluded from class until parents come to school to discuss the problem.  Ndebele had to go to explain his situation, so that his son could go back to school.

“The situation is very hard at home. For me and my family to survive I have to find piece jobs … They are not always there, so when I get one I have to make sure that I attend it…  If I need to attend a meeting then I leave it and continue when I come back.”

Thembi Ouckett, a Sociology PhD student and member of the Wits Workers Solidarity Committee, praised Ndebele’s courage in bringing attention to the desperation of outsourced employees.  “I don’t think any worker chooses to be an activist.  You are forced to be one.  The workers trust Ndebele so much.”

Ndebele has been accused of playing politics of affiliating with Economic Freedom Fighters, a charge he denies.

“The reality is, I have never been politically active or affiliated, and I’m not about to start now,” he said.  “I just found myself in a situation where I had to pick up the spear and fight for workers.”