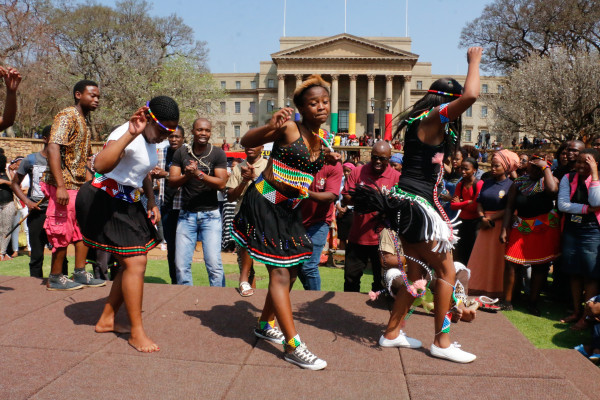 LAHL’UMLENZE: Zulu students perfoming ingoma at the Wits Library Lawns on Wednesday during the Heritage Day celebration. The Students Representative Council (SRC) organised a competition for five societies to showcase their traditional dance, songs, food and outfits. The Tsonga’s Khomanani Vatsonga Society won the competition by charming the audience with their makwaya and xibelani dances. Photo: Sinikiwe Mqadi.

Xhosa students opened the stage dancing umxhentso, followed by Venda students with their tshigombela and tshifasi dances. Zulu students, came second in the competition with their high kicks for their ingoma.

But it was the Tsonga’s students hip twisting and bum shaking makwaya and xibelani which were most loved by many students who declared them the winners for the dance category.

Ntshingila said all students come from different places but that doesn’t mean that they don’t get people who share the same culture with them in Johannesburg.

“We have to keep our culture because we don’t want our children to only read about our culture in iPads, we want them to see that my mother can still make a traditional beer even when you stay in New York,” Ntshingila said.

Students who were part of the audience were also dressed in their traditional outfits, chanting and screaming to performers and going around the tables to taste food. Molatelo Phanyane, 1st year BPharm, said she learnt a lot about her culture.

“I come from Venda, I have always heard about thongolifhe but I had not seen or eaten it before until today,” said Phanyane.

Another first-year BPharm student, Thembelihle Mzimela, said she learned about other people’s traditions.

“I grew up in Kwa-Zulu Natal where I was surrounded by people who speak my language and we all have the same culture, so I learnt a lot today.”

“They robbed us last year, Tshwana students were declared winners and they are robbing us again this year, we will no longer participate in this competition,” Mabuza said.

“We are not complaining because they performed better than us, rather because they entertained the crowd with music, and the crowed screamed. But we beat them in performance,” said Mabuza.

But the Tsonga students denied the accusation. Vukosi Rikhatso, Psychology Honours, who performed in the Tsonga group said everyone was asked if they will need a sound system during their performance.

“It’s a mistake to say we robbed you because we were all given a chance to tell the SRC whether we will need sound or not, so you didn’t say you will need it,” said Rikhatso.