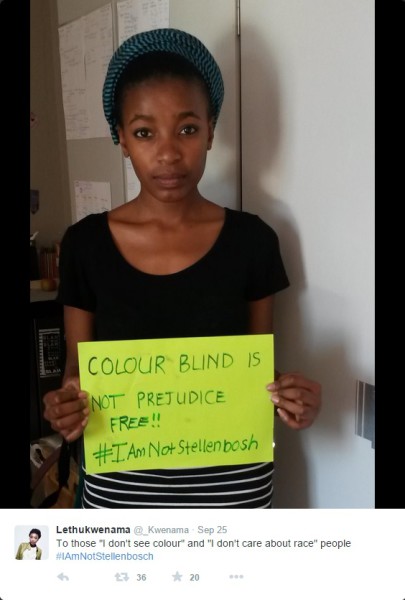 On Wednesday, September 23 students who call themselves, I Am Stellenbosch posted pictures of students with messages about their identities on their Facebook page with the hashtag, #IAmStellenbosch.

Black Twitter soon took notice of the hashtag and pictures, and quickly challenged and changed the hashtag to #IAmNotStellenbosch.

While some of the messages in the original hashtag focused on celebrating the rainbow nation and different cultural identities in South Africa, Black Twitter problematised the images and ideas carried by the images, with one twitter user saying, “There are no “Born frees” in SA that term suggests that #Apartheid had no residual effect #IAmNotStellenbosch.”

The responses by Black Twitter claimed that the I Am Stellenbosch messages were “tone deaf” and had no understanding of white privilege and institutional racism,

– What we are dealing with are centuries of gross & complex oppression compressed into a 21 year era called “freedom”. #IAmNotStellenbosch

The Open Stellenbosch movement released a statement condemning #IAmStellenbosch. In the statement they say, “we can reasonably conclude that the university actively creates an enabling environment for the intellectual vacuity which results in such racist tropes as #whereisthelove and #IAmStellenbosch.” While the Twitter campaign was going on, students on the campus engaged in a peaceful protest, meant to showcase the negative side of black student’s experiences at the university,

#IAmNotStellenbosch is a response to the trending #IAmStellenbosch concept. It will be filled with people actually discussing their (1/2) — The Quote (@the_quote00) September 25, 2015

#IAmNotStellenbosch The response and gathering will commence at 13:00 on the Rooiplein — The Quote (@the_quote00) September 25, 2015

That is, until campus security came: