University of KwaZulu Natal on fire

The University of KwaZulu Natal (UKZN) has been riddled with protests in recent years. The reasons for the protests vary from poor accommodation, low staff salary increases and increasing student fees, but the main reason behind most protest action has been uncertainty around the  National Student Financial Aid Scheme (NSFAS), which has been a concern on campuses around the country. The timeline below takes a look at the  protests that have occurred at UKZN’s different campuses over the past 15 years. 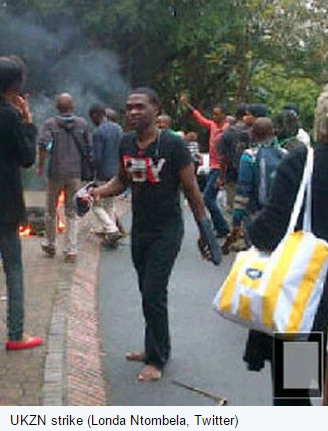 When it was still called the University of Durban in the Westville campus, a 23 year old student, Michael Makhabane was shot dead during a chaotic strike at the University premises. Rubber bullets had been fired by police but Makhabane was shot with live ammunition from a shotgun. The students were protesting against the de-registration of more than 500 students who could not afford to pay their fees.

In 2006, workers at the university backed by a number of worker unions and students, protested low worker wages and “sub-inflationary wage increases of the general staff while senior management were given bonuses.”  The workers, were also protesting the increasing corporate nature of the university. The strike went on for two weeks, before workers and management reached an agreement.

Two student leaders were arrested during a strike in the UKZN Westville campus after a strike that focused on the lack of transport between the university campus and the Durban CBD and dilapidated and inadequate accommodation on the Westville and Pietermaritzburg campuses.

During the year of the soccer world cup, grievances surrounding poor accommodation and transport services at the University continued. Thanduxolo Sabelo, the SRC president at the time said, “There were issues over accommodation at some campuses because they don’t have proper facilities. About 200 students also applied for financial aid, but they have not received it. There were also complaints over the high prices of cafeteria food.”

This year, the University closed it’s doors after students pelted rocks and burned tyres on the campus. As student complaints continued, the University hardened its hand in disciplining ‘dissident’ students.

The recent strikes at the University have become more violent. The funding and financial aid issue, which affects mostly poor black students, has been at the centre of the protests this year as well.

Ukzn Westville strike …. The students are angry but this is too much pic.twitter.com/oxp6T0DDYC