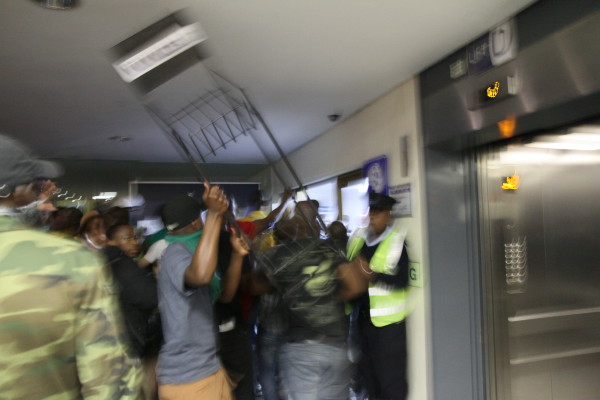 A student tries to throw a Wits Vuvuzela newspaper stand at the Fidelity security guards but is stopped by other students and campus control. The guards had to move behind glass doors in order to get away from some of the students. Photo: Dana Da Silva

The third day of a generally incident-free protest saw pepper spray being used on protesters in the Senate House concourse.

The protest at Wits University is against a 10.5% tuition fee increase.

Protesting students and Wits vice chancellor Adam Habib were in the concourse waiting for an emergency council meeting to begin but later in the evening about 30 private security guards were spotted entering the concourse by a few students.

Students attempted to keep the guards out by holding the doors shut but the security managed to force their way into the concourse. The guards were met with resistance from some of the students who threw trash at them.

The security continued in their attempt to enter the main concourse area but students reacted by throwing chairs, bottles and cool drink cans at them.

A number of students intervened and tried to calm the situation. They also linked up arm in arm to try and push back the students. But the security responded by throwing a pepper spray bomb into the crowd. Once the pepper spray subsided the crowd calmed down again and started to sing and chant as preparations were being made for the council meeting to start at 19:00.