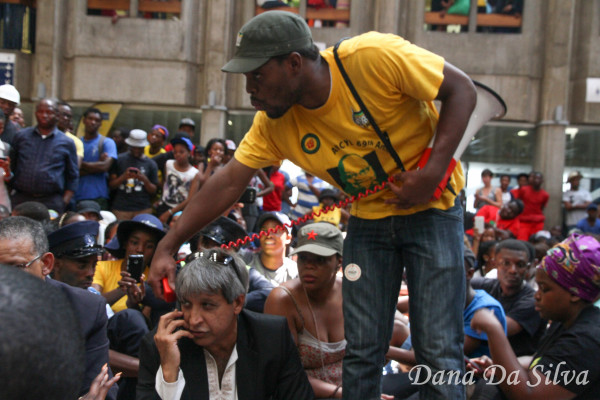 SIT DOWN: Students have said that if their demands to have  the tuition fee increase scrapped, they will protest till exams. Today’s protest began at the Yale Road entrance and moved to Senate House Concourse where Adam Habib joined students in a sit down until an emergency council meeting can be convened.

Student protests against fee increases at Wits University in Johannesburg, entered a third day today and look set to continue into next week.

Student protests may continue into next week if Wits University does not agree to scrap a 10.5 percent fee increase.

The protest, which began on Wednesday, has shut down academic activities on campus.

Students congregated at all of the university’s entrances and wouldn’t let other staff or students come in or out until late at night.

Today, students met at the Yale Road entrance on Wits Campus so that Vice Chancellor Adam Habib could address them.

“This is a revolution and our target is free education,” said Dlamini before the crowd of students marched to Senate House.

Habib agreed to sit with the students in the Senate House concourse until an emergency university council can be held to discuss the fee increase.

The Chairperson of the Wits Council Dr Randall Carolissen said over the phone, to which Dlamini held a megaphone to, that a meeting can only be held by tomorrow morning.

Students along with the vice chancellor will be sitting in Senate House until then.